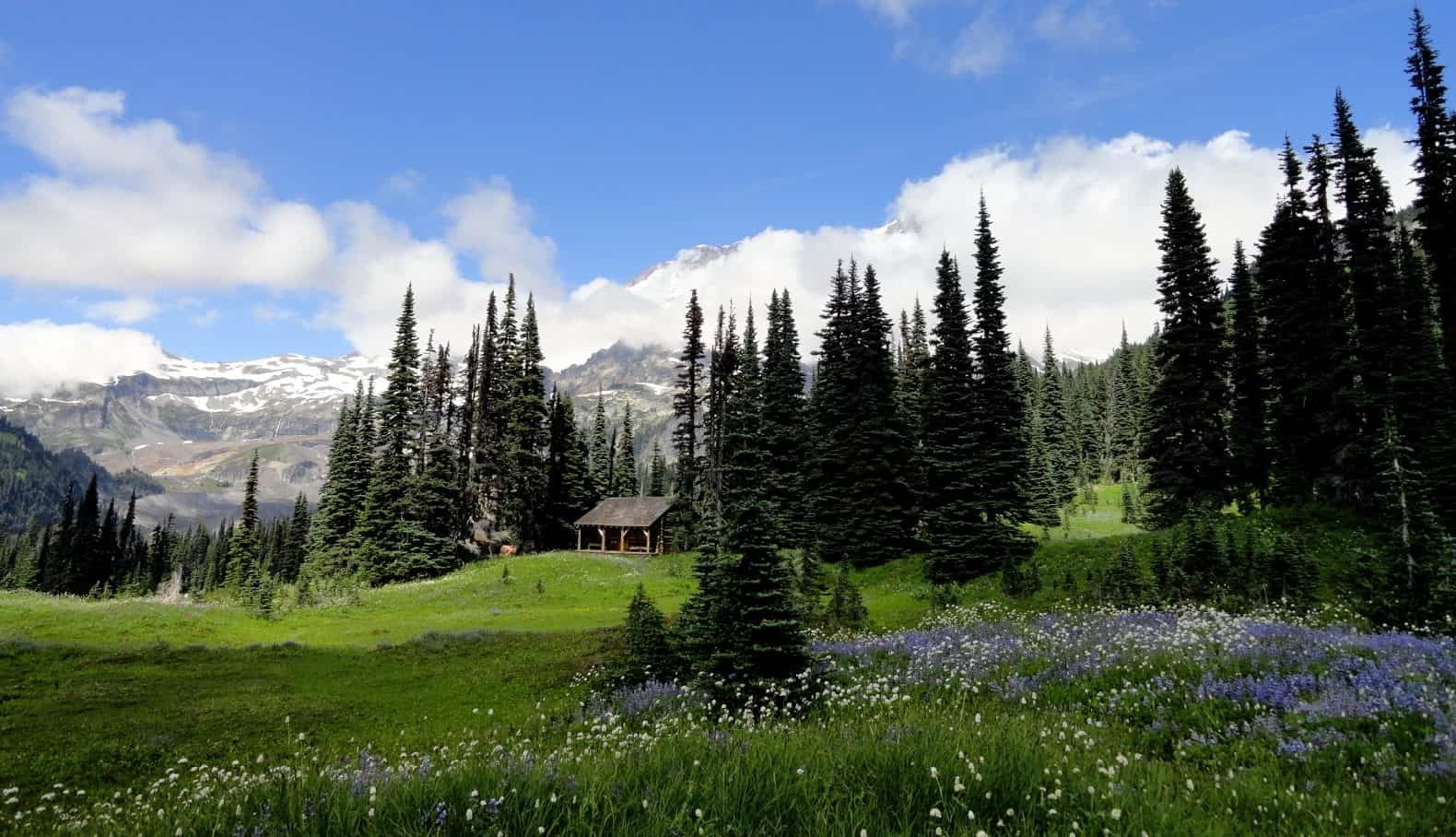 There are three ways to get to the fabled wildflower meadows and Rainier-reflecting tarns of Indian Henry’s Hunting Ground. None of them are easy. This route via the Kautz Creek Trail takes you up and along a knolled high ridge shrouded in alpine meadows. In-season flowers and huckleberries are bountiful. Views of the Mountain and ridges and peaks south and east are breathtaking. And crowds? Not on this trail.

The trail starts by paralleling Kautz Creek, a tributary of the Nisqually River. The creek is named for Army Lieutenant August V. Kautz who in 1857 made the first attempt to summit Mount Rainier. He was unsuccessful at reaching the summit, but the creek that bears his name has been pretty successful in a carrying out more than a few dramatic flooding episodes.

You may have noticed a fairly new bridge and stretch of road just before the trailhead. Thank Kautz Creek for that as well as nearly one mile of rebuilt trail. The Glacier-fed creek wreaked some serious damage to the trail and road in 2006.  It’s most famous flooding episode, however, was in October of 1947. It was then that heavy rainfall caused a jokalhaup (from the Icelandic, meaning a glacial outburst) on the Kautz Glacier causing a huge flood. This flood moved 1.4 billion cubic feet of rock, dirt, and till for more than 6 miles burying the Nisqually-Longmire Road. The flood also created a canyon more than 300 feet deep. You can learn about this event and the creek in general at the short little nature trail at this trail’s start.

Then start hiking on a mile near level stretch of forested trail alongside the graveled former creek bed. The late respected outdoors writer and VisitRainier hiking expert, Karen Sykes noted about this trail section:

“Today alders are growing back in, playing their role in re-settling the landscape. The rock-lined trail paralleling the dry creek-bed is sandy, almost like a beach. As the trail heads toward the crossing where Kautz Creek used to flow, there are overlooks with views of the destruction. Here you will see where streambanks eroded away and in the dry channel a trickle of mineral-stained water, downed trees, debris and root-balls clutching boulders. You may well ask, where is the fine line between destruction and creation?”

At about 1.1 mile come to a log-bridged crossing of Kautz Creek. Catch a glimpse of big white Rainier, and small but prominent emerald Tumtum Peak. This is a good turnaround for hikers out for a short and easy excursion. Beyond the bridge, the trail gets down to business. The trail now begins to climb steeply above the Kautz Creek Valley. The grade eventually eases with a few switchbacks higher on the ridge. It’s slow going, but hopefully the impressive primeval forest that you are now hiking through will help keep your attention off of the grunt. Stop frequently to awe at the big old trees along the way.

At about 3.0 miles, the trail crosses and then follows alongside a small creek. It then once again steeply climbs as it approaches a 5,300-foot knoll adorned with bear grass. The views are good—especially west to nearby Mount Wow and Gobblers Knob—and south to Mount Adams in the distance. The trail then slightly descends to traverse a beautiful meadow that explodes with blossoming wildflower throughout the summer. Rainier is now in full view luring you to come closer.

Enjoy a fairly level stretch before steeply climbing to a 5,600-foot shoulder of 6,010-foot Mount Ararat. Ararat was named by James Longmire’s son Ben who apparently thought the mountain with its strewn boulders and debris looked like the place where Noah’s Arc had landed.

Just to the south of Ararat is 5,577-foot Satulick Mountain. It was named by P. B. Van Trump (who along with Hazard Stevens became the first two climbers to successfully summit Mount Rainier) for Indian Henry (an alteration of his native name So-to-lick).

Walk a little farther down the trail skirting a few ledges and Indian Henry’s Hunting Ground soon comes into view. With Mount Rainier acting as a magnificent backdrop, the view is breathtaking. It’s expansive, too. Look south and east to the Tatoosh Range, Mount Adams and Mount St. Helens.

Now continue hiking descending 300 feet and reaching a junction with the Wonderland Trail. Head a short distance left and then right on a short spur to a 1915-built patrol cabin, the oldest remaining patrol cabin in the park. After taking a break at the cabin, wander a short distance left or right on the Wonderland Trail passing reflective pools and fields of flowers. If you have the time and energy, hike .3 mile north on the Wonderland Trail to the Mirror Lakes Trail. Then follow this 0.7 mile trail to a series of small ponds that reflect Mount Rainier. The view from the small lakes was used on the three cent Mount Rainier stamp in the US Postal Service’s 1934-1935 national park series.

So, who was Indian Henry? He is believed to be of Nisqually, Cowlitz or Klickitat origin. He became known as Indian Henry among the non-Native settlers. He was equally comfortable with Western customs as he was with his Native customs. He was fluent in English and several Indian languages. Indian Henry became known as an excellent woodsman and guide. He led several climbing parties to Mount Rainier, but never summited the mountain.

Indian Henry became fairly well off. It was believed by many of the area settlers that Henry had a gold mine somewhere on Mount Rainier. He always paid for his supplies at the local mercantile with gold nuggets. Aside from the gold, Henry made a decent living by providing travelers lodging and supplies at his farm.  Indian Henry often left his farm for periods of time to hunt and gather food for the winter; keeping within his native routines. One of his favorite spots for hunting mountain goats is a beautiful alpine meadow area splotched with sparkling tarns—a beloved place by hikers today known as Indian Henry’s Hunting Ground.

Notes: Dogs prohibited. Be sure that the log bridge is in place over the Kautz Creek before attempting this hike.

Trailhead directions: From Elbe at the junction of SR 7 and SR 706, head east on SR 706 passing through Ashford and reaching Mount Rainier National Park at 14 miles. Continue west on park road for 3.3 miles to the trailhead. Parking is on your right at a picnic area.

– Craig Romano, is an author of more than a dozen hiking guidebooks including the newly released 100 Classic Hikes Washington (Mountaineers Books) which includes several hikes in and around Mount Rainier National Park.