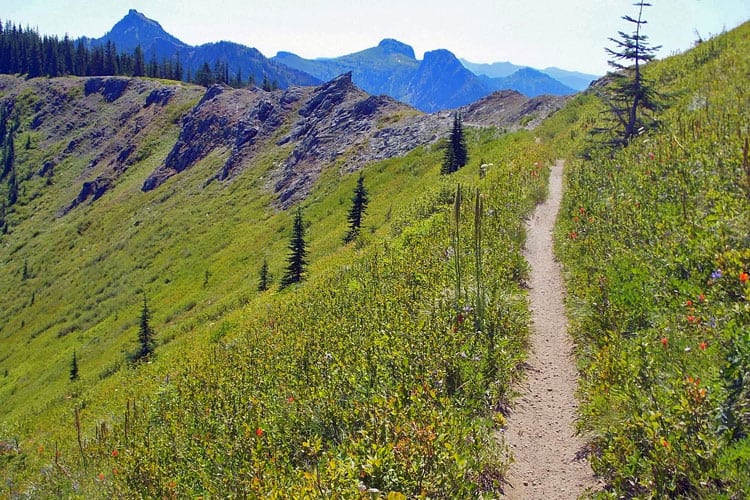 The trail to Juniper Peak is the kind of trail you never want to end, especially when you stand on the summit and look down upon the sensuous curve of the trail as it continues south. It’s easy to convince yourself if you just keep on going you’ll find that pot of gold at the end of the rainbow.

Though the trail is a hiker’s dream, make sure to carry plenty of water – this is a dry trail. You’ll be stopping frequently regardless of the temperature on your way to Juniper Peak for the views – Mount Rainier to the north, Mount Adams to the south, Mount Saint Helens to the west and the Goat Rocks to the east. On a very clear day, you may even be able to spot Mount Hood.

While the hike is considered moderate, the most difficult part of this hike may be getting to the trailhead; that will depend on what kind of vehicle you have. Your car is guaranteed a workout once you leave Randle and navigate the forest service roads to the Juniper Ridge/Tongue Mountain trailhead.

Though the trail is one of the most scenic in the South Cascades, it doesn’t seem to attract many hikers which we found baffling – perhaps this is because the trail is open to motorcycles, mountain bikes, and horses. We don’t mind sharing a trail with other recreational users, though the use of bikes over the years has created ruts in the first couple miles of trail.

The Juniper Ridge trail gets down to work immediately, climbing moderately and at times steeply. The first couple of miles are in the shaded forest and a cool breeze made the climbing easier. Late summer wildflowers added to the beauty of the forest. We even found cream-colored Cascade Mariposa lilies mixed in with thimbleberries, Indian paintbrush, lupine, mountain azalea and bracken. The lily is a perennial that can grow up to 15 inches tall with flowers 1-1/2 to 2 inches wide. Juniper Ridge is an ideal setting for this unique flower which grows in dry meadows, open forest, and volcanic soil and ranges from southern Washington to central Oregon. A common name is “Cat’s Ear” lily because the hairy fringe on the petals resembles a cat’s ear.

We also spotted a slime-mold near the trailhead – these look like something out of a science fiction movie, eerie and strangely beautiful. Do they move? We looked them up on The Internet and there was more detailed information than we bargained for.

According to one source, slime-molds lack chitin in their cell walls and they move (albeit so slowly you can’t see them move); hence they are classified as members of the Kingdom Protista (Protoctista). They come in a variety of colors (there are more than 900 species of them over the world); they feed on micro-organisms that live in any type of dead plant material.

At about the halfway point, the forest begins to open up with views south to Juniper Peak and even better views of Mount Adams. Turn around and look over your shoulder for another view of Mount Rainier (the views get even better as you gain elevation).

We had to blink to ease the transition from dark forest to the bright sky and the dazzling white volcanoes. It was a little bit like coming out of a tunnel into the sunlight. Just as we got accustomed to the bright noonday sunshine the trail ducked back into the forest where we once again relished the cool shade with a hint of a breeze.

At about 2-1/2 miles we reached a three-way unsigned junction in the trees. Relax – you don’t need a trail sign here – no matter which trail you take they climb up to the same place, a broad saddle between a high point and Juniper Peak. The views from the saddle may take your breath away – Mount Adams and Mount Rainier for starters and close-up views of Juniper Peak. From that saddle, Juniper Peak looks more suitable for climbers than hikers; you’ll see a steep scramble path that angles to the top but you needn’t go that way if you are summit-bound.

From the saddle the Juniper Ridge trail continues south, contouring around the base of Juniper Peak where you’ll come to another saddle at the base of the peak. This second saddle will be far enough for some hikers and not far enough for others.

This saddle is the easiest approach to Juniper Peak should you wish to climb it – it’s a “walk-up.” In other words, a peak you can climb without technical gear. However since views from either one of these saddles are superb; you won’t be missing out on much if you decide not to climb to the summit. Instead, you can continue on the trail as far as time and energy allow; the ridge is studded with several high points and outcroppings with views.

To climb to the summit of Juniper Peak, from the saddle look for a boot-path climbing (north) through steep vegetation and in places, loose rocks. You’ll see you aren’t the first to climb to this summit nor will you be the last. The summit is broader than it appears from below and there are several flat, chair-sized rocks to sit upon.

Look upon mighty Mount Saint Helens. As far as the eye can see there are green waves of undulating ridges with peaks you’ll need the map to identify, including Jumbo and Sunrise Peak (both peaks are accessible if you continue on the trail).

The summit of Juniper Peak is a colorful pastiche with a variety of stone-crop, buckwheat and hare-bells. As is often the case the harebells refused to cooperate in the breeze and hold still for this photographer who tried to immortalize them by taking a photograph.

Given the long drive, we regretfully made the saddle our turnaround after exploring a little ways beyond (a pile of volcanic rock that begged for exploration.)

For additional information and road/trail conditions contact the Cowlitz Ranger District at 360-497-1100.