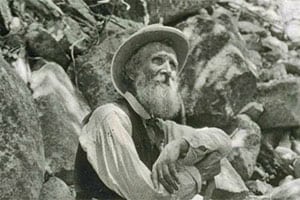 Famous for: 1) Climbing Mount Rainier and chronicling it in the Ascent of Mount Rainier, helping to bring public awareness to protect the mountain as a national park.

2) Advocating for the establishment of Yosemite and Sequoia National Parks; co-founding the Sierra Club; and authoring a dozen books and hundreds of articles on nature and the need to preserve natural areas.

While generally associated with California’s High Sierra and Yosemite National Park, the Scottish-American naturalist, author and preservationist John Muir was also instrumental in the establishment of Mount Rainier National Park. In August of 1888 at the age of 50 he joined a climbing party which included Major Edward S. Ingraham, photographer Arthur Churchill Warner and guides Indian Henry and Philemon Beecher Van Trump for an ascent of the 14,411-foot volcano.

Muir’s expedition nearly lost a member of their party on the descent when he broke through a snow bridge.

Muir’s expedition to the rooftop of Washington was arduous including a treacherous ford of the Nisqually River and a steep climb to the Paradise Valley. The party spent a couple of nights at Camp-of-the-clouds near what is now Alta Vista; before ascending what is now known as the Muir Snowfield to a spot at an elevation of 10,188-feet that would become known as Muir Camp. Muir chose this spot because the naturalist noticed the presence of light pumice on the ground indicating a lack of strong winds. However the spot was not entirely wind free so the party propped up rocks around camp to act as windbreaks. Warner described their stay like a night in Minnesota in December. The stone shelter that stands today at Muir Camp was constructed in 1921.

They successfully reached the summit and spent two hours upon it. But they nearly lost a member of their party on the descent when he broke through a snow bridge. They also had a harrowing passage beneath Gibraltar Rock where large rocks rained down upon them. Much appreciated hot coffee was waiting for them on their return to Camp-of-the-clouds that evening.

Muir’s group became the fifth recorded climbing party to have reached Rainier’s summit. But with Warner it became the first ascent documented by photography. Muir penned his experience in Ascent of Mount Rainier. The book along with Warner’s photos helped brought public awareness to the area and the need to protect it. And while Muir was impressed with being upon the mountain, he felt that it was better appreciated from below. He saw the value in preserving the area’s vast old-growth forests and pristine alpine meadows. In 1898 he wrote in The Wild Parks and Forest Reservations of the West, If in the making of the West, Nature had what we call parks in mind-places for rest, inspiration, and prayers -this Rainier region must surely be one of them.

He was especially touched by the mountain’s boundless flowers, writing, …above the forests there is a zone of the loveliest flowers, fifty miles in circuit and nearly two miles wide, so closely planted and luxuriant that it seems as if Nature, glad to make an open space between woods so dense and ice so deep, were economizing the precious ground, and trying to see how many of her darlings she can get together in one mountain wreath…