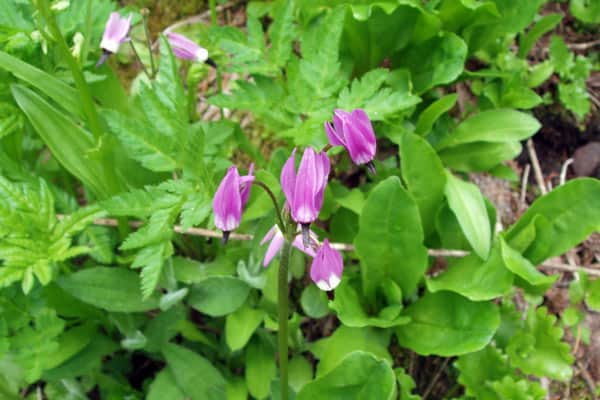 Dodecatheon jeffreyi is a species of flowering plant in the primrose family known by the common names Sierra shooting star, Jeffrey’s shooting star, and tall mountain shooting star. This wildflower is native to western North America from California to Alaska to Montana, where it grows in mountain meadows and streambanks. This is a thick-rooted perennial with long, slightly wrinkled leaves around the base. It erects slim, tall, hairy stems which are dark in color and are topped with inflorescences of 3 to 18 showy flowers. Each flower nods with its mouth pointed to the ground when new, and becomes more erect with age. It has four or five reflexed sepals in shades of pink, lavender, or white which lie back against the body of the flower. Each sepal base has a blotch of bright yellow. From the corolla mouth protrude large dark anthers surrounding a threadlike stigma. The flowers of this species were considered good luck by the Nlaka’pamux people, who used them as amulets and love charms.