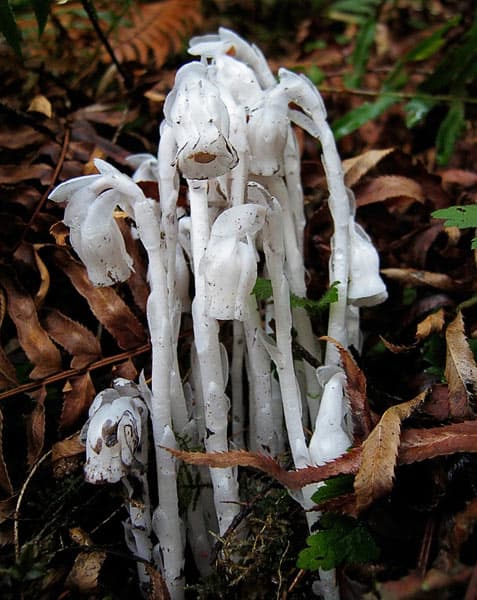 Monotropa uniflora, also known as the ghost plant, Indian pipe, or corpse plant is a herbaceous perennial plant, formerly classified in the family Monotropaceae, but now included within the Ericaceae. It is native to temperate regions of Asia, North America and northern South America, but with large gaps between areas. It is generally scarce or rare in occurrence. Unlike most plants, it is white and does not contain chlorophyll. Instead of generating energy from sunlight, it is parasitic, more specifically a myco-heterotroph. Its hosts are certain fungi that are mycorrhizal with trees, meaning it ultimately gets its energy from photosynthetic trees. Since it is not dependent on sunlight to grow, it can grow in very dark environments as in the understory of dense forest. It is often associated with beech trees. The complex relationship that allows this plant to grow also makes propagation difficult. The plant is sometimes completely white but commonly has black flecks and a pale pink coloration. Rare variants may have a deep red color. The stems reach heights of 10–30 cm, clothed with small scale-leaves 5–10 mm long. As its scientific name suggests, and unlike the related Monotropa hypopitys (but like the closely related Monotropastrum humile), the stems bear only a single flower, 10–15 mm long with 3-8 petals. It flowers from early summer to early autumn. Like most mycoheterotrophic plants, M. uniflora associates with a small range of fungal hosts, all of them members of Russulaceae.