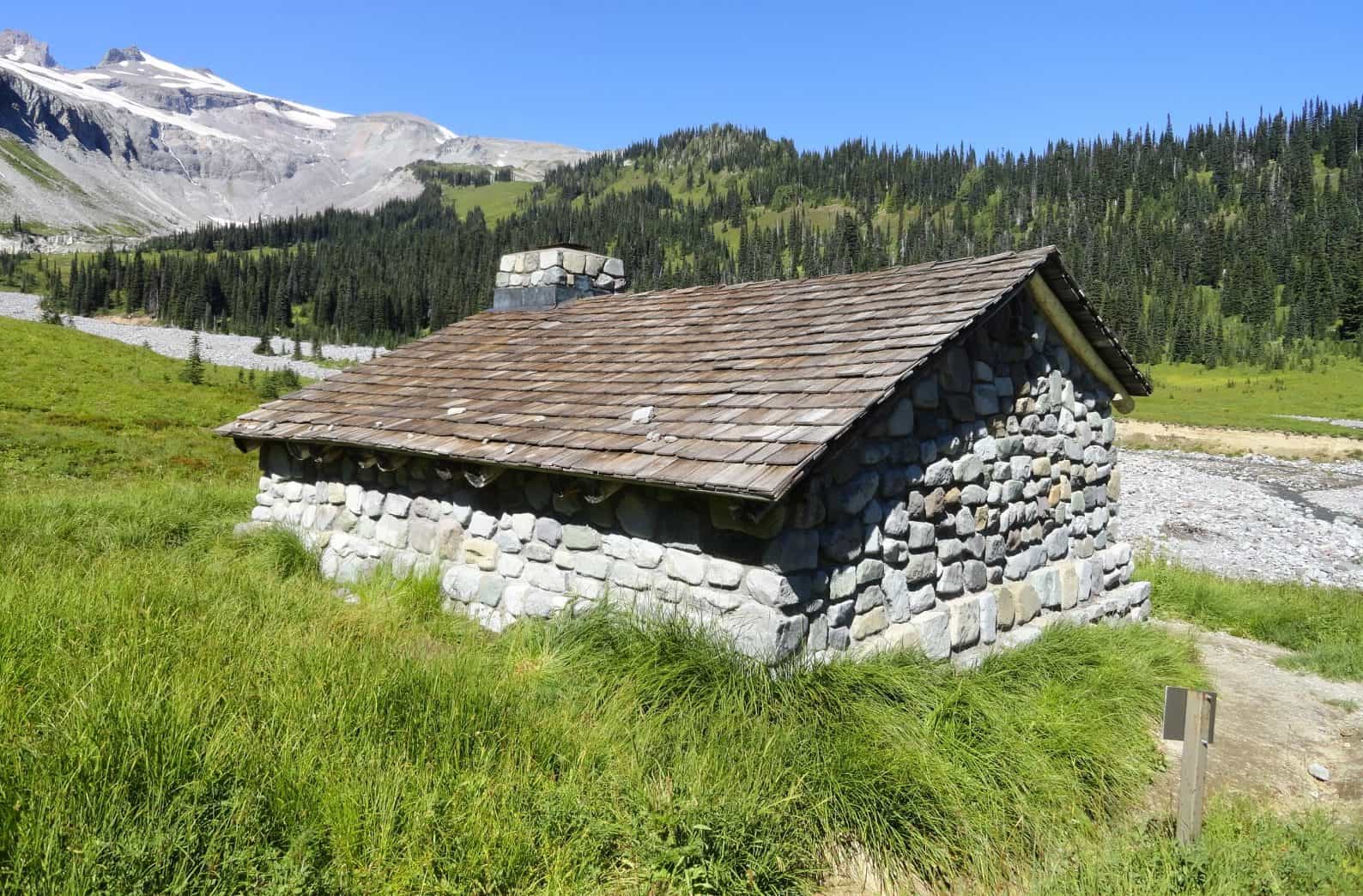 Almost 30 years have passed since my last hike to Indian Bar. And while time may have erased many memories from that long-ago trip, it is still magical to top a grassy knoll and get that first look of the almost-mythical Indian Bar shelter in dew-beaded meadows below.

Then I carried a hefty Pentax-K 1000 and a few rolls of slide film; today a digital camera that weighs about as much as a hummingbird, has replaced it.

Indian Bar took two tries this year: in July the meadows were a Monet swirl of colorful wildflowers but a late start and excessive heat kept us from reaching our goal. In September the weather was conducive to the long hike, though summer appeared reluctant to depart. Many wildflowers were still in bloom though hellebore and blueberry shrubs were giving way to autumns’ chilly embrace and turning from green to gold.

In September the colors seemed brighter, the shadows longer and there was an indescribable scent of fall in the air, a heady brew of musk, earth and aging vegetation. At higher elevations the smoky scent of elk added to the infusion, and in meadows, flat tent-sized patches showed where they had lain.

The first few miles of the Wonderland Trail provide a warm-up and an introduction to what lies ahead.

After crossing Nickel Creek (about a mile) and a spur to designated campsites (N 46° 46′ 21″, W 121° 37′ 26″), the trail climbs, steeply at times, through a boulevard of cedars and Douglas firs charred by forest fires. When the Wonderland Trail reaches the junction for the Cowlitz Divide Trail/Olallie Creek Trail (N 46° 46′ 36″, W 121° 36′ 22″), grassy meadows begin to replace forest with occasional glimpses of Mount Rainier.

After minor ups and downs, the trail drops abruptly to an open spot where a cluster of boulders invite a hiker to sit and gaze at Mount Rainier and an emerald-green knoll that promised even better views. That was as far as we had hiked in July. That day we met hikers who told us that Indian Bar was oh, another 1 1/2 miles or so away over “that green knoll” – what they did not say is “that” green knoll was only the first of several.

In September, we passed the boulders prepared to conquer the knoll. Of course by the time you get to that first knoll, you’re hooked. You’ll want to keep going, especially as you see the trail spooling out ahead of you as it straddles the Cowlitz Divide. As late as 1906, the Cowlitz Indians hunted and gathered berries along the divide; parts of the trail are actually their old trail.

The trail climbs to several high points; the highest at 5,930 feet with unobstructed views of Mount Rainier and on a clear day, Mount Adams and Mount Saint Helens rising above the Tatoosh range (south) and north to the Cowlitz Chimneys. As the trail rises and climbs at times, tread is narrow with views of meadow-studded valleys on both sides. Tea-colored tarns twinkle below; nestled in shaggy meadows. Outbound hikers told us we’d see elk in the next meadow though of course, by the time we got there they had disappeared. Musky stands of yellow cedar attest to their presence; by September, elk are moving down into valleys; you may hear them bugling.

Summer flowers still clung to the high meadows along the divide; we saw lupine, Indian paintbrush, yarrow, heather, bistort and valerian. Western pasqueflowers nodded their shaggy heads in the breeze, beautiful in their old age amidst tawny meadows edged with dark sedges.

After a barren, rocky stretch with some pumice, the trail finally relented to allow us a view of Indian Bar at the edge of a meadow in a deep valley near the Ohanapecosh River; in September, little more than a stream. Fog swirled at the head of the valley where Ohanepecosh Park began; it did not look inviting.

A short descent through meadows and a scrim of subalpine evergreens brought us to the meadow where the shelter beckons to those who venture this far. First, we took the side-trail to Wauhaukaupauken Falls where the Ohanapecosh flows through a deep, mossy-slick, narrow gorge (in Native American jargon Wauhaukaupauken translates “spouting water”). A rickety bridge spans the gorge; be careful. Designated campsites are on the other side of the gorge; more campsites and a toilet are located behind the shelter (the rock shelter is a group shelter).

The shelter (5,093 feet) is for groups of up to 10 people and provides bunks (steel platforms, chained to the wall). No fires are allowed – note the fireplace is blocked with rocks. A broom resting against the wall reminds hikers to keep it tidy and it was. Since the shelter was empty, we sat on the porch looking out at the scene, amazed to have such glory to ourselves.

Returning to Indian Bar was as good as discovering it the first time. On second thought, make it better. After a certain number of years have passed, you too, will feel that your second visit to Indian Bar is more gift than accomplishment.

How to get here

From the Stevens Canyon Entrance of the park continue about 10 miles up the Stevens Canyon Road to (via Highway 123) to the Box Canyon parking area, elevation 2,981 feet. The Wonderland Trail trailhead is across the road, a little east of the nature trail at Box Canyon.

Q: If I get a wilderness permit to do backcountry camping at Indian Bar, how many sites are there?

A: There are 4 sites at Indian Bar and 1 group site. For additional information on Wilderness Trailside Camp locations at Mount Rainier National Park click here for a Wilderness Trip Planner.

Top-notch entertainers to take the stage during the Evenings on Railroad Concert Series this summer.  A free concert with live entertainment, it's a perfect addition to an evening in downtown historic

Top-notch entertainers to take the stage during the Evenings on Railroad Concert Series this summer.

A free concert with live entertainment, it’s a perfect addition to an evening in downtown historic Enumclaw.

The small town of Wilkeson invites visitors to celebrate the annual Wilkeson Handcar Races.   The spirited competition event features a parade, food vendors, and other events. Wilkeson Days and the handcar

The spirited competition event features a parade, food vendors, and other events. Wilkeson Days and the handcar race provides a fun chance for all ages to celebrate the town’s Railroad and Coal mining history.

The vendor market and food trucks at Coke Oven park will open at 10:00 AM and will close at 4:00 PM. The parade scheduled to start at 11:00 AM will depart from the elementary school. The handcar race starts at 1:00 PM.

Visit the historic mining town, shop the vendors and local businesses. Eat and drink at the food concessions, or one of the town’s local restaurants. Follow the Wilkeson Handcar Races Facebook page for more event updates.