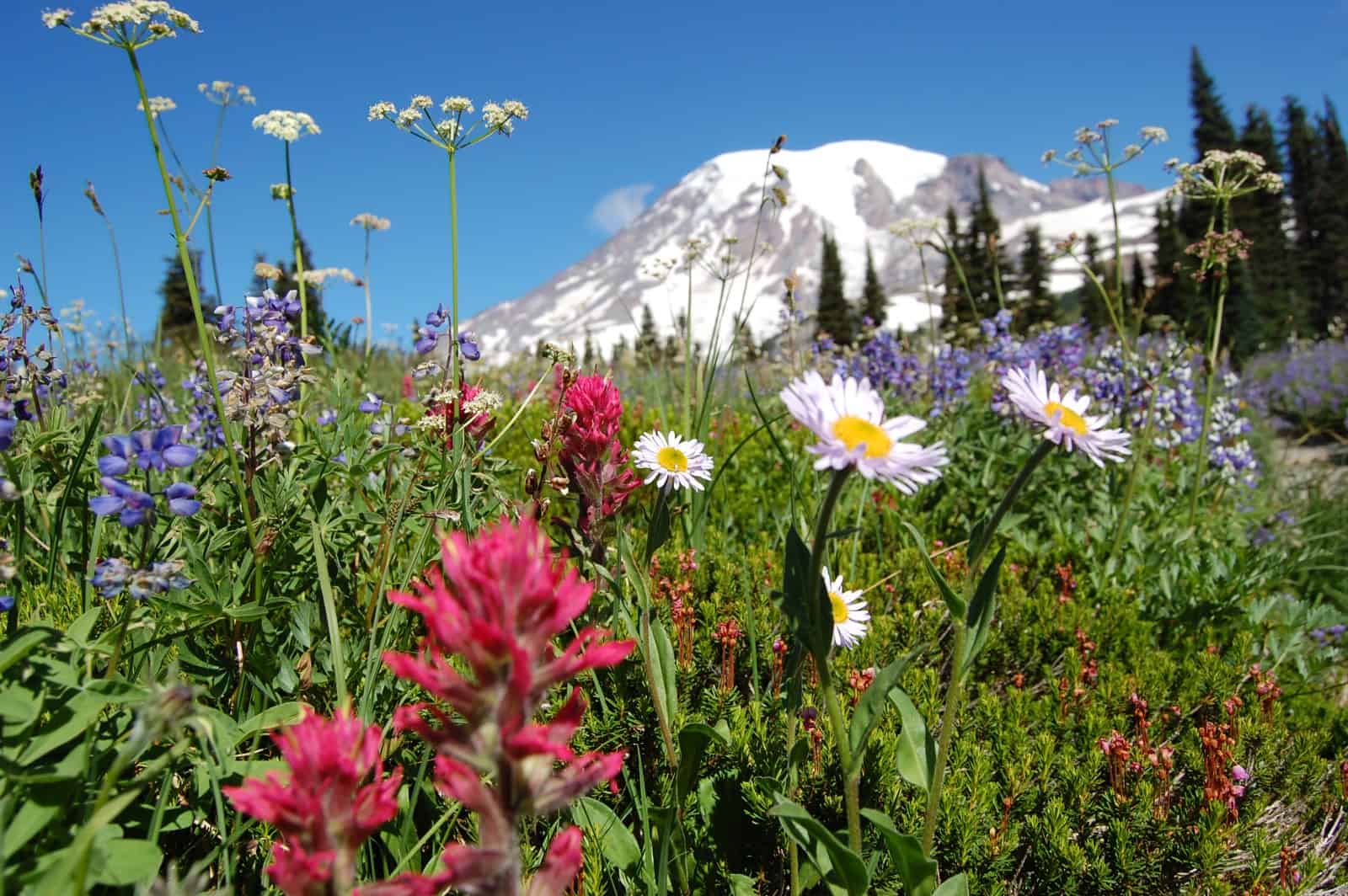 Skip to content
If you only have a day to spend at Paradise you can sample several iconic trails by hiking a scenic loop that begins and ends at Paradise via the Lakes Trail and Mazama Ridge. 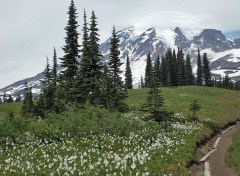 You’ll encounter Reflection Lakes, Louise Lake, stellar view of Tatoosh Ridge and of course the mountain itself. Wonder at wildflower meadows and dip your toes in sweet streams. This trail offers a taste of so much that is good about Mt. Rainier National Park.
Find the Lakes Trail/Paradise River trailhead on the south (right) side of the main Paradise parking lot just off the main road. The trail immediately begins its descent to Reflection Lakes.
After you descend 500 feet or so you’ll come to the first of several signed trail junctions. When in doubt follow the signs (with directional arrows) for Reflection Lakes. We did encounter one unsigned junction on our way to the lakes where we paused momentarily (here, turn left, not right).
The trail was like a postcard as it hugged the wildflower-lined lakeshore. There and beside the Stevens Canyon Road we saw fat clumps of rosy spirea, lupine, arnica, bistort, valerian and Indian paintbrush. In case you wonder which white flower it is that is so sweetly and subtly scented – its valerian.
The trail leaves the Stevens Canyon Road and starts climbing back to Paradise. That’s a moderate climb with several places to stop for views into Stevens Canyon, peaks of the Tatoosh Range and Louise Lake (south) as you gain elevation. 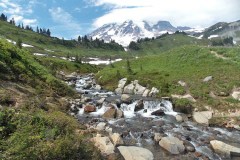 After a bit of a climb the trail gets a little steeper before it descends to cross a creek where you’ll notice two foot-bridges lying in the stream. The placement of good-sized rocks makes this an easy stream crossing; now imagine the force of nature that knocks such bridges asunder as casually as a bear knocking berries off a blueberry shrub. Park rangers are well aware of changeable weather and remove some foot-bridges every fall before winter storms wreak havoc.
The trail continues climbing to a rocky overlook (right) of Louise Lake with even better views of the Tatoosh Range, the lakes and Stevens Canyon. A little further on is a spur to another viewpoint; this one signed “Faraway Rock” (right), a side-trip well worth taking.
Between Reflection Lakes and Mazama Ridge you’ll pass several small tarns, some of them seasonal created by snow-melt, others deep enough to last most of the year. We met a couple hiking down from Paradise who raised their fingers to their lips to signify “shhhhh;” we stopped and waited wondering what they’d spotted in the vegetation above us. When they tiptoed down to us they whispered a mother grouse had hidden her chicks and was walking back and forth across the trail above to divert their attention. We managed to get a picture of the grouse before she scurried away into the bushes again. You are more apt to hear a grouse than to see one – they make a low-grunting, rhythmic sound, almost like a muffled drum. 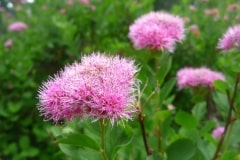 Soon the trail begins to break out into meadows dotted with subalpine clumps of trees. Summer has come late to Mount Rainier this year due to a heavy snowfall this winter so you’ll see early-season flowers mingling with later-season flowers, all in their haste to bloom and reseed. The meadows are verdant and with a few lingering snow-patches still in place the contrast between the flower fields and remaining snow patches are striking.
At about 5,300 feet we came to another junction – here we continued uphill toward Mount Rainier as the trail follows the spine of Mazama Ridge (at higher elevations the ridge narrows). As we continued along the ridge I recognized places where we’d snowshoed and dug snow caves in previous winters but today we welcomed the sun and the flowers.
Snow patches in the meadows vied with dazzling white avalanche lilies for our attention. Valerian and bistort, both white flowers, shared their space with avalanche lilies, even a few Western pasqueflowers. The banks of white flowers were sprinkled with an occasional Magenta Paintbrush here and there; to describe such brilliance is beyond the powers of this author’s pen.
Be sure to stay on the trail no matter how tempting it is to stray – you don’t want to be a “meadow stomper” and could even get cited for doing so. These meadows are fragile; even heather is more vulnerable than it appears and a single misplaced boot-print can destroy a plant that has taken many years to grow. We’re glad the flowers grow so close to the trail that leaving the trail for a better view is not even necessary.
Where bits of snow still clung to the trail, wands marked the route though the trail is so close to being snow-free they are hardly needed. Again, signs guide the way back to Paradise should fog or clouds suddenly appear and you lose sight of landmarks. 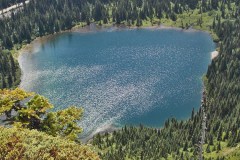 As we started down into Edith Creek Basin we began encountering more hikers, some hiking our loop in reverse, others content just to get to Mazama Ridge, others climbing to Panorama Point which as of this writing is still partly under snow.
Though it was hard to imagine scenery more beautiful than what we’d already hiked through, the trails at Paradise manage to do it. There were even more wildflowers interspersed with seasonal streams flanked by dark rocks topped with yellow-green moss, views of waterfalls including the not-oft-seen Sluiskin Falls (no trail leads to Sluiskin Falls). 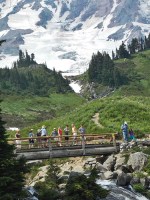 We crossed an un-named creek (part of the headwaters of the Paradise River) on a bridge; here the steep terrain relaxes a bit and there are plenty of spots to sit and gaze upon the scene. As we continued down to Paradise we began to encounter more people on the trails; we even encountered a family we’d met at Reflection Lakes who couldn’t believe we’d hiked back to Paradise rather than driving.
We stopped at Myrtle Falls (here the trail crosses Edith Creek on a footbridge) content to share the scenery with visitors from afar that may not pass this way again. Though it may be tempting to get closer to the waterfall for a closer view or photo this is no place to lose your footing. Don’t crawl under the guide-rope for a better look; stay on the trail. A short designated spur (left) leads down to a viewpoint of the bridge that crosses Myrtle Creek Falls with Mount Rainier in the background. You may have seen this particular scene on calendars – it’s not a view to miss.
Before you know it you’ll be on the paved trail just above Paradise and the Henry M. Jackson Visitor Center. The Visitor Center may be crowded on weekends but the air-conditioning is welcome on a hot, summer day. Pick up another trail hand-out and start planning your next hike. One visit to Paradise will never be enough.
Karen Sykes, Visit Rainier Hiking Expert

For more information on visiting Mt. Rainier, go to visitrainier.com.

Visit Rainier is a not-for-profit, non-membership destination marketing  organization that promotes tourism in the gateway communities around Mt.  Rainier.