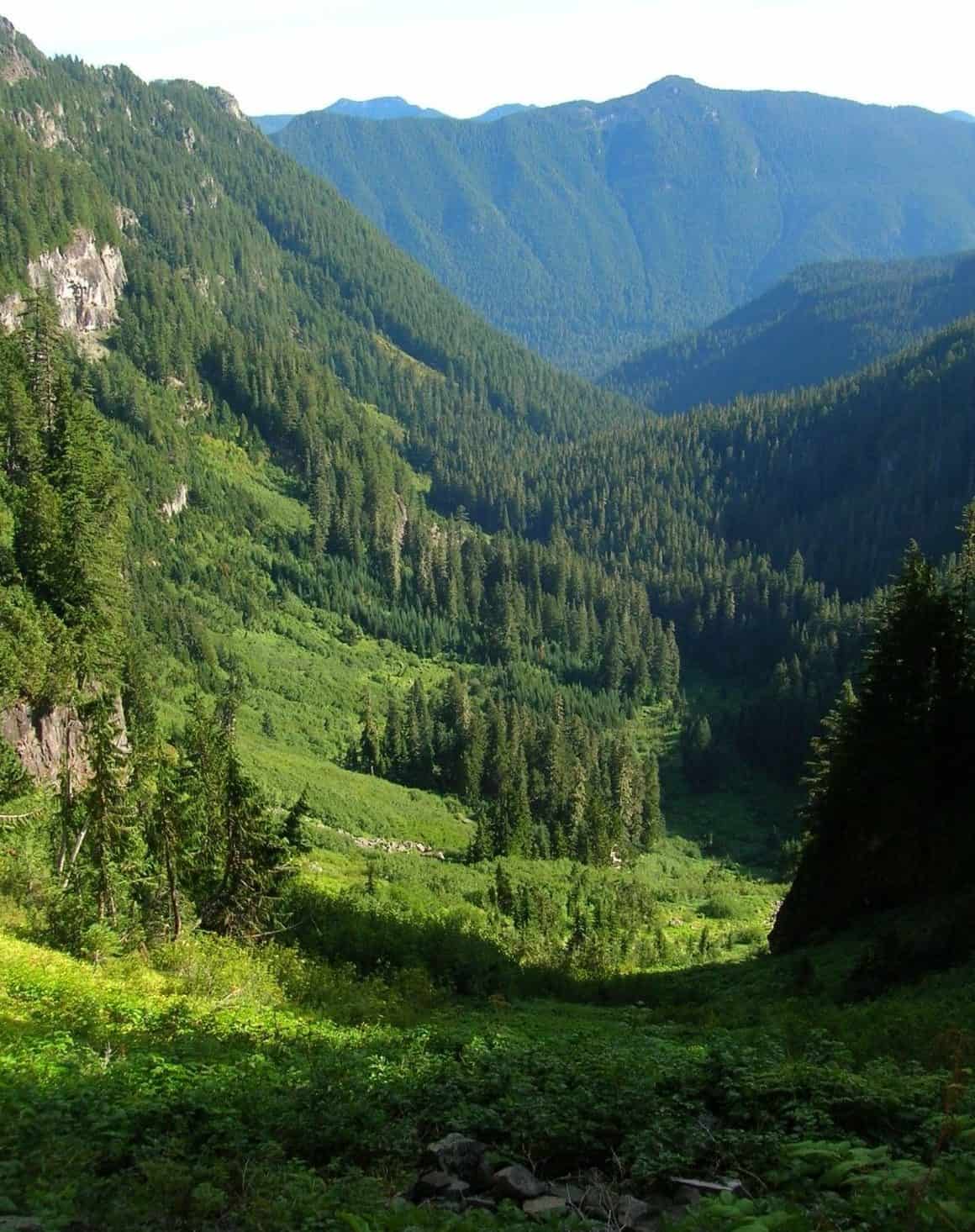 Though Goat Peak trail can be a “devil” of a hike, the views are angelic enough you won’t mind the drive to Hells Crossing east of Chinook Pass where the hike begins. Goat Peak is the site of a fire lookout on American Ridge – and like most fire lookouts in the Pacific Northwest, the Goat Peak lookout on American Ridge was dismantled in the 1960s though the views are still there and from high points along the trail. The romance of fire lookouts is hard to extinguish – there’s just something about a lookout that draws hikers…and it’s more than just the views.

At the trailhead, we displayed our Northwest Forest Pass and filled out a permit to enter the William O. Douglas wilderness (permits are available at the trailhead). Note this approach to Goat Peak is also a trailhead for the Pleasant Valley Loop trail.

The Goat Peak trail starts out climbing beside a seasonal creek in a steep, forested gully. It was still early enough in mid-July there were plenty of wildflowers blooming in the forest including columbine, vanilla leaf, Nootka rose and where the trail broke out of the forest an entirely different display of wildflowers. While still in the forest we startled a mule deer doe who watched us with big eyes, posing long enough for a photo before bounding silently into the forest.

There are a variety of trees in the forest including an unexpected band of larch trees, a pleasant surprise. The needles of the larches were bright green and soft to the touch. We spotted vine maple, Alaska cedar, white pine, Douglas firs, hemlocks and a variety of shrubs including mountain azalea. The scent was a delightful blend of pine trees and wildflowers.

Once out of the gully, every step of the way was more beautiful than the step before as the views began. Look across (north) to Fife’s Peaks and old lava flows – Fife’s Peak is a volcanic plug that once filled the crater of an ancient volcano (most of the volcano has eroded away). Along the trail, rocky pinnacles that have endured erosion are silhouetted dramatically against the sky.

Because of recent thunderstorms in the mountains this season, we kept our eye on the clouds and listened for thunder in the distance – we did not want to be caught in a thunderstorm, especially out in the open.

We were also careful to watch our step – once the trail breaks out of the forest it becomes a ridge-walk, an airy path consisting of loose ball-bearing sized gravel on packed dirt – possibly uncomfortable for novice hikers. No matter how experienced you are as a hiker we recommend sturdy leather boots with good tread as it is all too easy to skid on such terrain. Trekking poles are also very helpful.

When we were not watching our feet we stopped at viewpoints to photograph lance-leaf stonecrop and other wildflowers that hugged the rocky slope. We continued to keep track of the restless clouds as we continued – especially to the east where a line of dark, sinister clouds perched on the horizon.

With each switchback the views improved as did the wildflower displays. Scarlet gilia lit up the rocky outcroppings with fiery colors in contrast to the lemon-yellows and bright white flowers of buckwheat. The trail also grew narrower and more exposed as we gained elevation – exercise caution.

Unfortunately, the summit of Goat Peak was not in the cards – just as we approached a very exposed series of switchbacks we heard the rumble of thunder in the distance and knew we needed to seek shelter in the forest (avoid tall trees in the forest; lightning is more apt to strike tall or isolated trees). It didn’t take long to retreat to a protected spot in the forest so we stopped there for lunch before continuing our descent.

If you hear thunder retreat to a sheltered area if you are in the open (a picnic shelter is not safe enough). Avoid isolated trees and water – if unable to find shelter you are advised to crouch down with your feet close together (lying down is not advised as that only makes you a bigger target). If caught in the open move away from metal objects (cameras, ice axes, cell phones) – hikers are also advised to stay at least 15 feet away from each other. If you are camping get out of your tent as tent poles will attract lightning. If you are close to your vehicle get in (roll up the windows) and do not touch metal during the storm.

After not hearing thunder for a while, we felt it safe to continue heading down the trail and stopped to explore a couple of spurs that led to more rocky outcroppings with views – the texture of the outcrops looked like Cubistic paintings with repetitive patterns in shades of cadmium yellow, gold ochre, orange, and vermillion.

While we were disappointed we didn’t get to the summit we’d hiked high enough to attest this is a stunning trail for experienced hikers with good boots and trekking poles who are not afraid of exposure (remember that one person’s idea of exposure might not be the same as yours). Be sure to carry plenty of water – other than snowmelt and the seasonal creek at Hells Crossing there is none from this approach.

To get there: from Chinook Pass continue east on SR 410 to just west of milepost 84 at Hells Crossing trailhead (right).