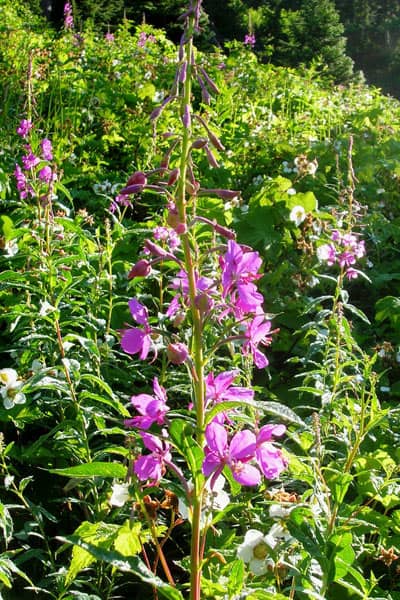 Chamerion angustifolium, commonly known as Fireweed (mainly in North America), Great Willow-herb (some parts of Canada),[1] or Rosebay Willowherb (mainly in Britain), is a perennial herbaceous plant in the willowherb family Onagraceae. It is native throughout the temperate Northern Hemisphere, including large parts of the boreal forests. This species has been placed in the genus Chamerion (sometimes, incorrectly, given as Chamaenerion) rather than Epilobium based on several morphological distinctions: spiral (rather than opposite or whorled) leaf arrangement; absence (rather than presence) of a hypanthium; subequal stamens (rather than stamens in two unequal whorls); zygomorphic (rather than actinomorphic) stamens and stigma. Under this taxonomic arrangement, Chamerion and Epilobium are monophyletic sister genera.