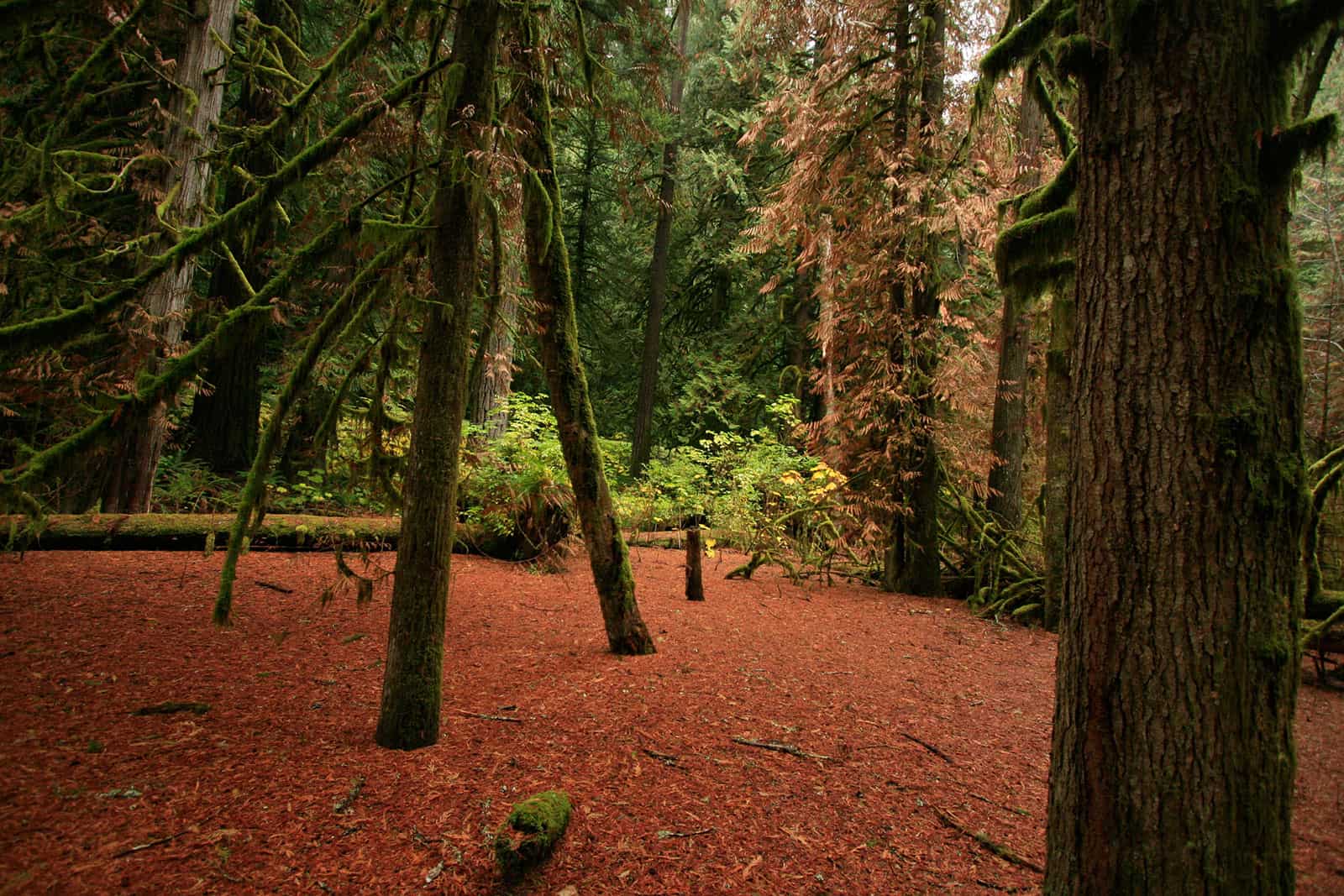 Though the siren of high country trails is calling, don’t be misled – there’s still snow at higher elevation trails. Fortunately, there are trails near Mount Rainier you can hike without getting into snow. Federation Forest State Park is a textbook example of such a trail. Any time of the year is good to visit the park, stroll through the Catherine Montgomery Interpretive Center, and enjoy a picnic on beautifully arranged picnic grounds above the White River.

In early July it felt like summer – only a few weathered trilliums remained to remind you that spring has quietly passed and has transitioned into summer. For spring flower displays, visit in May and for Technicolor displays of vine maple visit in fall – in fact, in past years we’ve even enjoyed a picnic in December. In July it simply felt like an old-fashioned sleepy, summer day and we were grateful for the park’s shady trails.

The two Fred Cleator Interpretive Trails meander through the forest; the West Loop (about 1 mile) and the East Loop (1/3 mile) that run along the old river terrace.

The trails are named to honor Fred W. Cleator, an early forester and conservationist. As you hike the West Loop trail, take time to read interpretive signs describing the medley of evergreens as well as a rich understory of native shrubs and woodland flowers. In July we discovered pinesap, a saprophyte emerging from the soft carpet of pine-needle-covered earth near stately conifers.

In late June through July, flowers you may encounter include bleeding hearts, Canadian dogwood, bead lily, and trilliums (already gone to seed). Though main trails are signed, secondary trails bisect the main ones; all trails lead back to the Catherine Montgomery Interpretive Center, the White River or Highway 410. There are approximately seven miles of trails, including a stretch of the historical Naches Trail. That segment dates back to 1853 as the Naches Wagon Road when the Naches Trail connected Puget Sound to Eastern Washington.

The park is also an ideal spot to picnic on your way to or from Mount Rainier National Park, Crystal Mountain, or as you tour the Chinook Scenic Byway.

The park provides picnic shelters and picnic tables, including one quietly tucked away in the shady forest. The upper picnic area provides a covered shelter, restrooms with running water, braziers, a drinking fountain, and an ADA-compliant restroom. The lower picnic area beside the White River is a pretty place to linger and watch the changing light on the White River as it surges downstream with its gay, summer border of foxgloves, alders, and thimbleberry shrubs with fat white blossoms (by mid-summer those thimbleberries are ripe and ready-to-eat).

Gardens at the Catherine Montgomery Interpretive Center highlight edible and poisonous native plants from different regions of Washington. Montgomery was considered a pioneer in education with a passion for conservation. Inside the interpretive center are interpretive displays that elaborate on the differences in ecosystems ranging from the east side to the west side of the mountains.

In the mid-1920s Jean Caithness Greenlees, a teacher at Everett High School grew alarmed by the pace of deforestation in Washington and across the country. She initiated an effort to preserve a tract of old-growth trees for use as a park to ensure that future generations could experience an ecosystem that was rapidly being wiped out.

Greenlees presented her idea to Esther Maltby, the president of the Washington State chapter of the General Federation of Women’s Clubs (GFWC-WS), then known as the Washington State Federation of Women’s Clubs. Maltby lent her support to the plan and the organization launched a “Save a Tree” campaign in 1926. Their goal was to raise $25,000 to purchase a 62-acre stand of old-growth forest near Snoqualmie Pass.

The first donation to the project was a $500 check from Stephen Mather, a nationally known conservationist and first director of the National Park Service. Local chapters of the GFWC-WS were called upon to fundraise, which they did by selling “Save a Tree” buttons for $1 each. Donors could also “buy a tree” for $100 to have a bronze plaque with their name placed on a tree in the park. The names of these donors are now on a monument in the park’s picnic area.

It took two years to raise the money, with the final donation coming from Gilbert Grosvenor, president of the National Geographic Society. The park was acquired in 1928 and dedicated in 1934. The name “Federation Forest” was chosen to honor the work of the GFWC-WS.

Tragedy struck the new park in 1938 when logging on adjacent property left its trees vulnerable to wind-throw and it was condemned as a safety hazard. This set off an effort to find a new location for the park. The present-day location along the White River was eventually chosen and was opened to the public on July 16, 1949.

In 1958, Catherine Montgomery, a pioneering educator, conservationist, GFWC-WS member and acknowledged “Mother of the Pacific Crest Trail” (it was her idea, originally) donated her estate of $89,000 to be used for education at the park. This money was used to build the Catherine Montgomery Interpretive Center, which was dedicated on September 20, 1964.

Members of the GFWC-WS continue to volunteer in the park and donate money towards its maintenance to this day.

The original park near Snoqualmie Pass sat on the accustomed territory of the Wenatchi and Coast Salish Tribes.

From Enumclaw travel east on SR 410 about 18 miles, at milepost 41 find well-signed Federation Forest State Park on the right-hand side of the highway.

Camping is not allowed, and dogs must be on leash and under physical control. Fires are only allowed in fire rings in designated picnic areas. Bicycles are allowed on paved roads only. The park is open from 8 a.m. to dusk (year round). For additional information on this park, including closures, rules and regulations, visit the Washington State Parks website.

Q: What makes this area unique, why should I visit?

A: This 574-acre park, located near Greenwater on the Chinook Scenic Byway, is a testament to a group of forward-thinking women in the 1920s, who decided it was important to preserve old-growth timber during the rush towards logging. Today this cathedral of trees beckons to visitors year-round offering nearly seven miles of interpretive trails, a picnic area, and a garden highlighting edible and poisonous native plants from different regions of Washington. The Catherine Montgomery Interpretive Center offers interpretive displays that elaborate on the differences in ecosystems ranging from the east side to the west side of the mountains, as well as exhibits on the early women conservationists who fought to make the park a reality and the Muckleshoot Indian Tribe on whose traditional land the park sits. Take time to appreciate the rich understory of native shrubs and woodland flowers and watch the White River flowing through the park.

A: Yes, dogs on leash are permitted. Please do not let your dog off-leash. Please bring supplies with you to properly clean up after your dog and dispose of pet waste responsibly. Please follow leave-no-trace principles.