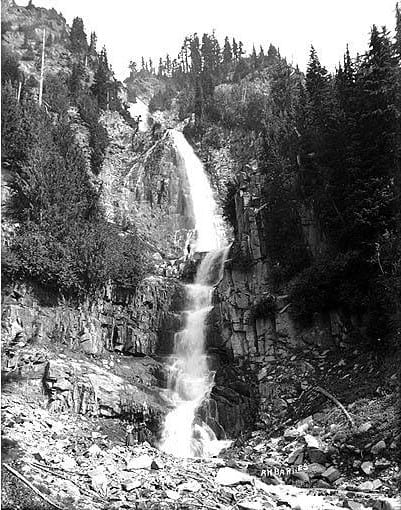 Though the story behind the name of this tiered waterfall is unknown it has been recognized as “Fairy Falls” since Mount Rainier National Park was designated. Famous photographers, including Asasel Curtis, photographed the waterfall in the early 19th century. Originally estimated to be 1,000 feet tall, 680 feet is more accurate as measured by topographic maps and other sources. The waterfall is less dramatic than in yesteryear as the flow depends upon the amount of annual snowfall (in summer it dwindles to a trickle). Access is discouraged as the waterfall is off-trail and best viewed from the “Bench” along the Stevens Canyon Road. Meanwhile, you can hike to Reflection Lakes from Paradise; “The Bench” is the flat area at the Snow and Bench Lake trailhead, a little east of Reflection/Louise Lakes. The “Bench” isn’t noted on most maps. In other words, it’s the last flat spot before the road descends into Stevens Canyon proper.

Directions: From the Nisqually entrance to Mount Rainier National Park, continue 15.6 miles on the Longmire-Paradise road to the Stevens Canyon turnoff. Turn right and proceed three miles east on the Stevens Canyon Road, past Reflection Lakes and Louise Lake, to a small turnout on the right side of the road.