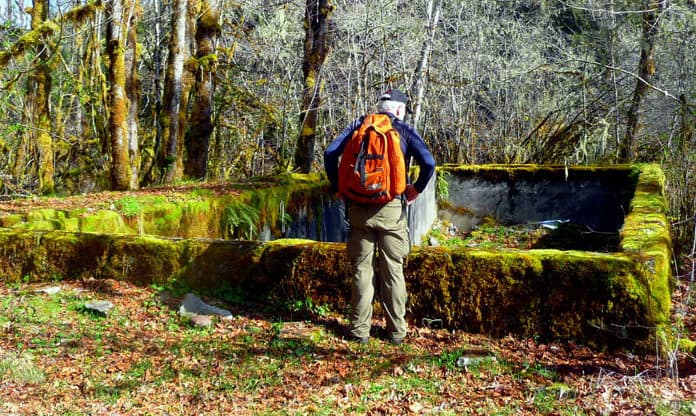 Fairfax was platted in the late 1890s when the Northern Pacific Railway extended its line from Carbonado to Fairfax (the historic bridge over the Carbon River south of Carbonado is named for Fairfax). In addition to coal deposits, there was also a lumber mill, the Manley-Moor Lumber Company, nearby that employed over 200 men. Like many mining towns Fairfax was a “melting pot.” At Christmas miners took up collections to purchase Christmas presents for every child in town and baseball was a passion for all ages and ethnicities in summer.

By the early 1900s coking ovens were producing more than 250,000 tons of coal per month and as the population grew so did the demand for coal. Until 1921, access to Fairfax was only by rail or horse (in 1921 Pierce County extended the road over the Carbon River and into Fairfax).

However, in just over 20 years the town went from boom to bust — the demand for coal dropped as oil and gasoline were increasingly used to meet energy needs. Houses were abandoned or salvaged and by1941 Fairfax was a ghost town. Pierce County retained the lands until 2002 – then the county set aside several hundred acres as open space for the public.

Encroaching forest, floods and fires also took a toll on the town. The Fairfax Hotel and school burned down and the Carbon River railroad bridge washed away. Today only a few pillars from some of the mine buildings remain and purportedly coke ovens (which we did not find). We did find the site of the railroad turntable indicated by a center post.

Getting to Fairfax is an adventure. The hike begins on a decommissioned road (closed to vehicles) a couple miles south of the Fairfax Bridge (see getting there for details). In addition to ditches and berms you’ll also encounter a few downed trees and boggy areas that spill out across the road during the rainy seasons – sturdy boots are strongly suggested.

As the road levels off in the valley it becomes more difficult to follow. As vegetation leafs out in the summer, you may have to navigate the old-fashioned way, by lay of the land. Once you are at the level of the valley the road fades to a slight indentation through a large, grassy meadow where a few, lichen-encrusted fruit trees still cling to life: This is Upper Fairfax (Lower Fairfax is on the other side of the river).

Our major discovery was finding the Fairfax swimming pool (you’ll find it by staying on the track through the meadow). The pool is huge, at least by “artifact” standards. The foundations of the pool are intact as are the moss-covered steps leading down into the pool (the pool was inside the schoolhouse).

Even if you don’t find any artifacts, the meadow is an idyllic place to sit and listen to the whispers of the Carbon River and ponder what it might have been like to live and work here a hundred years ago or so. Today it is a quiet place, a setting of abandoned apple trees, grasses, ferns, wild roses, orchids, and trilliums; in the fall you’ll also find mushrooms.

You will certainly discover as did we that one visit is not enough.

Getting to Fairfax – From Wilkeson/Carbonado continue on route State Route 165 toward the Carbon River entrance of Mount Rainier National Park (go mid-week if possible as parking is limited). About a half mile past the Fairfax Bridge turn left at the split in the road onto the Carbon River Road. Continue a scant two miles to where you will see several large boulders just off the road (left). Park in the small pullout there and walk down the road to the meadow, then head north (left). Explore.

As always – if you do encounter private property signs do not trespass. Refer to the site below (Ghost Towns of Washington) for their “Code of Ethics” which should apply to anyone interested in exploring ghost towns.