“Boys! Quit squishing each other in there, you’ll get stuck!”

Why 10-year-old boys choose to do things like smashing one another in nature park turnstiles, I’ll never know. We were just minutes from arguably the coolest new kids’ play area in the Pacific Northwest, and yet, here they were, just outside the gates, trying to squeeze the stuffing out of one another.

Energy levels were high the day we checked out Kids’ Trek, the new half-acre kids’ play area at Northwest Trek Wildlife Park in Eatonville. It was the end of Spring Break and I had promised both of my offspring that they could each bring one friend for a day at Northwest Trek. To be honest, I wasn’t sure if the 13-year old girls I had along were going to be excited about visiting something called a ‘play area’, but all doubts were cast aside as they ran full-speed for the 20-foot high, hollowed out tree trunk play structure, and declared a tag war on the boys.

Kids’ Trek has plenty of open area to run. It includes slides, a 15-foot high fire pole, cargo nets to crawl across and through, as well as a mini-trampoline that works well for launching oneself away from fellow tag players. The play area also includes a covered picnic shelter and is fully fenced, making it an ideal place to keep kids corralled, entertained and fed. There is also a special toddler area that offers buckets, shovels and sand to amuse smaller children.

After an hour of running, sliding, crawling and hiding about the play area, the boys decided it was time to build a fort, while the girls checked out the 100-foot long stream and river otter statues, and I set up our picnic in the covered area. Kids’ Trek provides salvaged logs and poles for constructing play shelters.

Lunch finished, we hopped on the naturalist-guided tram tour through Trek’s free-roaming animal exhibit. The day had turned drizzly, which seemed to appeal to the animals, as we spotted many of them in the open. On hotter days animals seek tree shade, making viewing more of a challenge.

The predator exhibits were the next stop after our tram ride. More competition ensued as kids raced to see who could get to which habitat the fastest, and who was taking the better animal selfies. The brown bear was definitely the most photogenic, while the wolverine got my votes for best side eye and giving no cares.

We intended to return to Kids’ Trek before leaving, but the drizzle had turned to rain, so we headed to a local bakery for late afternoon treats. It was here that the previously tag happy 13-year olds reverted to their natural state, and insisted on editing photos.

Kids’ Trek is free with admission to Northwest Trek and is best suited for toddlers to tweens. It was built to inspire children to connect with nature, and to encourage kids to take an interest in wildlife preservation.

All aboard for the sip of a lifetime. The Washington Wine Express passengers enjoy a train ride through the forests and foothills south of Mount Rainier. Fares include wine tasting tickets,

All aboard for the sip of a lifetime.

The Washington Wine Express passengers enjoy a train ride through the forests and foothills south of Mount Rainier. Fares include wine tasting tickets, souvenir wine glass, refreshments, and roundtrip train ride. Be sure to bring your camera to capture all the fun, the beauty, and your own smiling selfies!

Trains departing at 12:00 PM from the depot in Elbe, Washington.

Make a weekend out of it. There is so much to see and do in the area. From a scenic drive with waterfalls to hikes in the forest to a romantic sunset trail ride on horseback to a relaxing treatment at a day spa to exploring a whimsical sculpture park to watchable wildlife or a challenging and exhilarating ropes and zip line course. 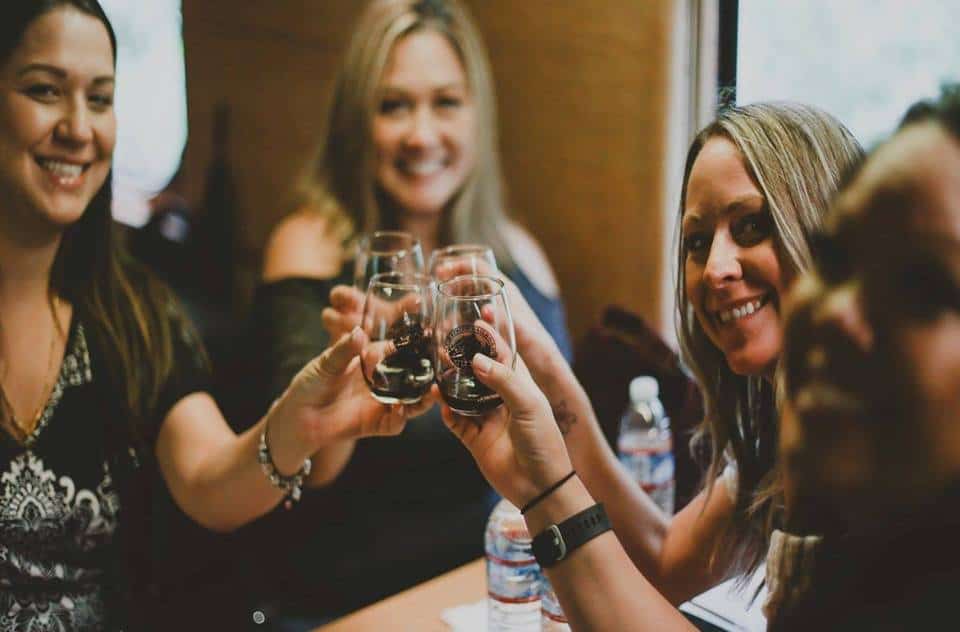