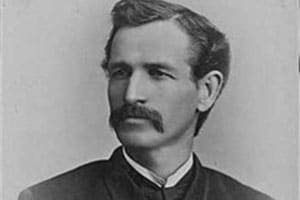 Famous for: Ascended the mountain eleven times including with John Muir. Advocated for national park status for Mount Rainier and named several features on the mountain.

Also notable for: First superintendent of Seattle Public Schools, charter member of The Mountaineers, and established first Boy Scout Troop in the Northwest.

Edward Sturgis Ingraham was born in 1852 in a small town in Maine to a family whose lineage went back to the state’s earliest settlers. Ingraham initially studied to be a printer, but eventually went in to teaching. In 1875 at the age of 23 he came to Seattle where he accepted a job as a principal and to oversee the city’s schools; which at the time numbered three, staffed by six teachers with an enrollment of 200 pupils. A year later he was elected Superintendent of King County schools which he served for 6 years before becoming the first Superintendent of Seattle Public Schools.

Ingraham would go on to serve on the State Board of Education upon Washington’s admission to statehood. In 1886 during the city’s Chinese riots, Ingraham was sworn in as Deputy Sheriff of the state militia to maintain order. He would eventually move up the ranks in the newly established National Guard of Washington achieving the rank of Captain.

In 1888 he retired from his superintendent post and established a printing house. He now had more time to devote to his interest in mountaineering. In August of 1888 he joined a climbing party which included naturalist John Muir, photographer Arthur Churchill Warner and guides Indian Henry and Philemon Beecher Van Trump for an ascent of Mount Rainier. He would climb the 14,411-foot volcano eleven times in his life.

Ingraham’s 1894 climb led to an erroneous measurement of the mountain at 15,500 feet.

Ingraham’s misreading of his barometer by disregarding the effects of an incoming storm led to his inflated measurement. Never-the-less, heeding to his own exuberance (and disregarding other climbing parties’ measurements that had the mountain 1,000 feet lower) Ingraham declared that the Columbia Crest was the highest point in the United States exempting Alaska’s Mount Elias. Aside from being a blatantly wrong statement, it was also strange in that Ingraham left out Alaska’s Mount McKinley, the highest point in North America in that statement.

Ingraham was a big proponent for establishing a national park at Mount Rainier. After one of his climbs, he escorted his party of 13 men and women down the streets of Tacoma. Parading in their climbing gear, they drew attention to the mountain and its allure, hoping to garner public interest in visiting and protecting it.

Ingraham’s enthusiasm for the outdoors and the outdoors lifestyle continued to grow over the years. He was a charter member of The Mountains upon their formation in 1906. In 1911 he organized the first Boy Scout Troop in the Northwest. In his 60s he led his scouts on numerous trips into the mountains and to Mount Rainier.

Ingraham was responsible for naming several features on Mount Rainier including Camp Muir (where he camped with John Muir in 1888), Summerland and the Elysian Fields (which reminded him of a mythological region of paradise on Earth). The Ingraham Glacier on the mountain’s south side is named for him as is Ingraham High School in Seattle. He passed away on August 16, 1926 and is buried in Seattle’s Lakeview Cemetery.