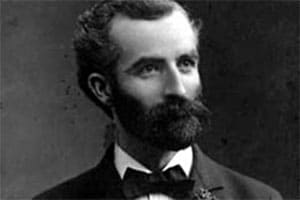 Famous for: Writing “Mount Rainer, A Record of Exploration.” Published in 1916, one of the most authoritative volumes ever written on the mountain’s human and natural history.

Also notable for: His role as a University of Washington professor, Washington state legislator, and President of the Mountaineers.

If ever Washington had a true Renaissance man, it would be Edmond S. Meany. His name is well recognized around Puget Sound associated with the University of Washington, a hotel, and a mountain in the Olympic National Park. Meany was born in Michigan in 1862 and came west to Seattle with his family in 1877. Despite some early hardships, he enrolled at the University of Washington and graduated Valedictorian of his class in 1885. He later received his master’s degree.

Approaching the age of 50 Meany took up climbing.

After college, Meany worked in the newspaper industry and served two terms in the Washington state legislature in which he introduced legislation to set aside 355 acres for a new (current) University of Washington campus. In 1897 he became a professor teaching history and forestry at the UW. He eventually headed the UW history department.

In 1899 Meany met John Muir in Seattle as the Sierra Club founder was getting ready to depart for Alaska. Meany was inspired by Muir and eventually helped steer the Mountaineers in joining with the Sierra Club to fight to protect the Hetch-Hetchy Canyon in California.

Approaching the age of 50 Meany took up climbing. In 1908 he joined and became president of the fledgling Mountaineers and served in that position until his death in 1935. Meany climbed Rainier as well as the state’s other four volcanoes and Mount Olympus. He was a dedicated historian with a strong interest in Washington State. He amassed a collection of historic documents and photographs and tirelessly lectured and wrote many books and articles on Northwest history. In 1916 his book, Mount Rainier, A Record of Exploration, was published which featured interviews and accounts of early explorers of the mountain, as well as a comprehensive section on place names. It is still considered among the best authoritative sources on Rainier.

Aside from his interest in Mount Rainier, Meany became active in many conservation campaigns throughout the state. He worked with former Seattle mayor and shipbuilding magnate Robert Moran (who was also influenced by John Muir) to establish Moran State Park on Orcas Island. Meany stayed active teaching, writing and enjoying the outdoors until his death in 1935 at the age of 72.

A year after his passing, a Mountaineers group organized an outing at Mount Rainier in which they erected the Meany Memorial Seat on Burroughs Mountain. Meany Creek north of the Fryingpan Glacier and 7,200-foot Meany Crest above Summerland were also named for Edmond S. Meany.