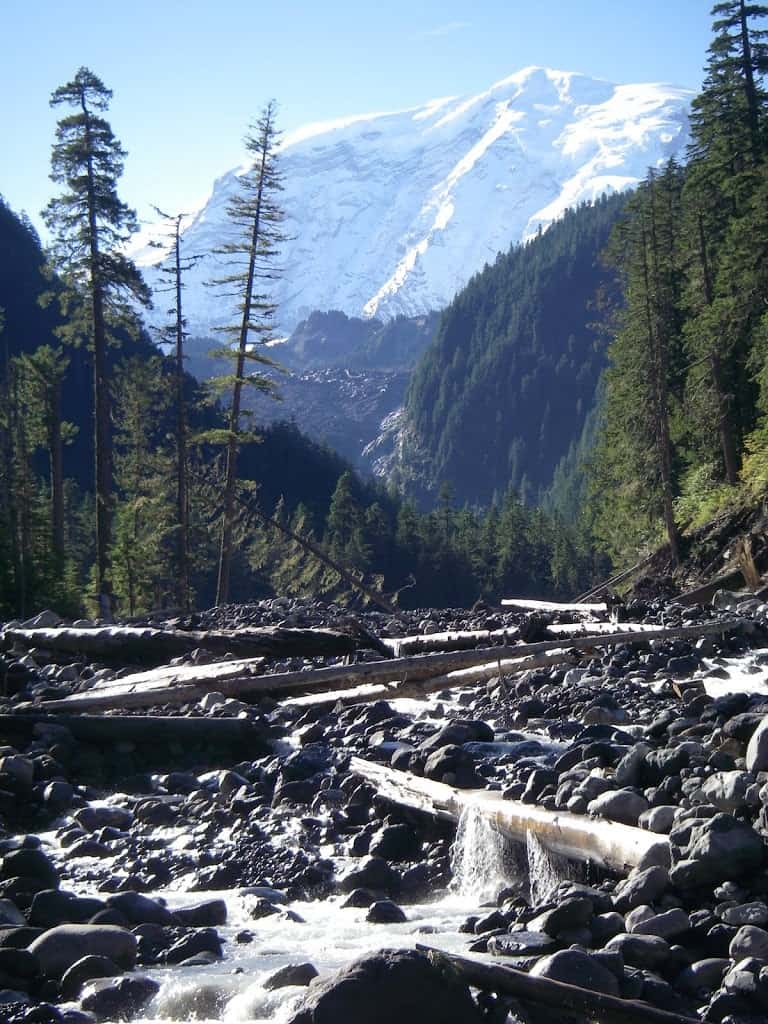 The October sun rises as I drive. As the morning sky lightens, I follow the road up through Bonney Lake and Wilkeson, through the sleepy bedroom towns and the edges of the forests. From time to time, I can see the mountain as I close the distance between us. A small lenticular cloud hangs above the summit, slowly being shredded by the jet stream, like a flag tattering in the wind.

I arrive at the Carbon River Ranger Station and park the car. With the motor turned off, I can finally hear the river and the birds, the sound of the breeze as it trickles through the boughs of fir and spruce high overhead. The early sun filters through the canopy, throwing long morning shadows on the empty parking lot here at the end of the road.

My goal for the day is the Carbon Glacier overlook, and the primary reason for the early start is that it’s not as short a hike as it used to be. The trail from Ipsut Creek Campground to the glacier and back was once a 7-mile excursion; now that the road ends at the Park entrance, however, Ipsut Creek is still almost 5 miles further up the stricken gravel track, making the entire round-trip a 17-mile venture.

Floods have always been the bane of the Carbon River Road. When the rain falls and the snow melts too quickly, the river exceeds its banks and revises its course without regard for man-made obstacles. In 1995 and 1996, and most recently in the winter of 2006, serious slides have closed the road for prolonged periods. With budget considerations and the forces of nature arrayed against it, there is a significant chance that the road will never be rebuilt, at least not completely.

Although the road is indeed washed out, not all of it is washed out. There are two major slide areas but other than these, the road is much the same as it ever was, a meandering lane that follows the river, gradual in slope and simple to negotiate. Bicycles are allowed between the Park entrance and Ipsut Creek, which makes the distance that much easier to cover and shortens the hiking portion considerably.

It takes me a little over an hour to ride to the Ipsut Creek Campground. It is strange now to see all of the campsites among the trees there at the bend in the river, the extra-wide turning areas for motor homes and the oversized parking lot. There are a few tent campers in one of the waterfront sites as I cycle through on my way to the trailhead, but no vehicles of any kind. Not anymore.

I lock the bike up near the start of the trail itself. After an hour of riding, it feels good to be back on foot. Before long, my body finds its rhythm and my feet find their way almost automatically. It’s a pleasant trail, with a few short climbs and drops, nothing too arduous.

At several points along the way, where the trail crosses open spaces and when the view of the river is clear, it is easy to see the power of water, and the ample evidence of the unstoppable destruction when water and gravity work in tandem. The remains of giant trees, logs as thick as bridge pilings and as long as history, are scattered like random sticks, not only along the course of the river, but in the surrounding gullies and avalanche chutes. It is quiet here today, but the tumultuous record of the past is plain to see, a reminder that the geologic work here is ongoing.

Just short of the three-mile mark, the route crosses the river in a series of log bridges and tracks in the gravel. As with the road, damage to the trail has closed some sections and forced others to change course but it’s not hard to stay on the correct line, and I follow a sequence of cairns to the other side of the river. When I get there, I come across a trail sign that bears a notice for hikers that the Wonderland Trail has been temporarily diverted to the Northern Loop Trail and points the way toward Windy Gap and Lake James. I turn right at the trail junction, toward the glacier, saving those other places for a future trip.

The Wonderland Trail’s iconic suspension bridge is still there, spanning the riverbed just below the start of the last climb up to the overlook. I set my pack down and walk out onto the swaying platform, out to the middle where the cables arc down to the railing before rising toward the other end. The mountain is right there, insistent, dominating. I can see the top of the glacier and a portion of its face, graphite-black and stained with meltwater. I look down to the river bed, where the milky water crashes and sputters downward through the stones, where my shadow waits patiently for me to return to the trail.

I tackle a short uphill section, through the trees at first and then coming out into full daylight. The trail sticks to the side of the south-facing rock, and I absorb the warmth of the sun along with the view. The imposing snout of the Carbon Glacier is center stage, filling the foreground, while the white-mantled crown of Rainier provides the backdrop, the towering Willis Wall alternating bands of rock and ice.

The glacier itself is dirty black, encrusted with boulders and pebbles alike, a thick gravelly river of slow moving ice. The terminus is down hill from where I am standing, a couple of hundred yards or so away across a steep scree field, but I am not tempted to go there today. (There was a time perhaps, when I was younger, that I may have tried it, but no more.) The Park Service is on my side with this, and actively discourages hikers from approaching the snout of the glacier. Continuous rock fall at the face presents a major hazard; I am comfortable where I am.

I eat my lunch there in the sun, trying to mentally inhale the immensity of my surroundings. I don’t think it’s possible. I take photos to help my recall – I’ve yet to see an ugly picture of a mountain – but power and scale such as this never seems to translate into two dimensions.

Which, after all, is why I made the trip.