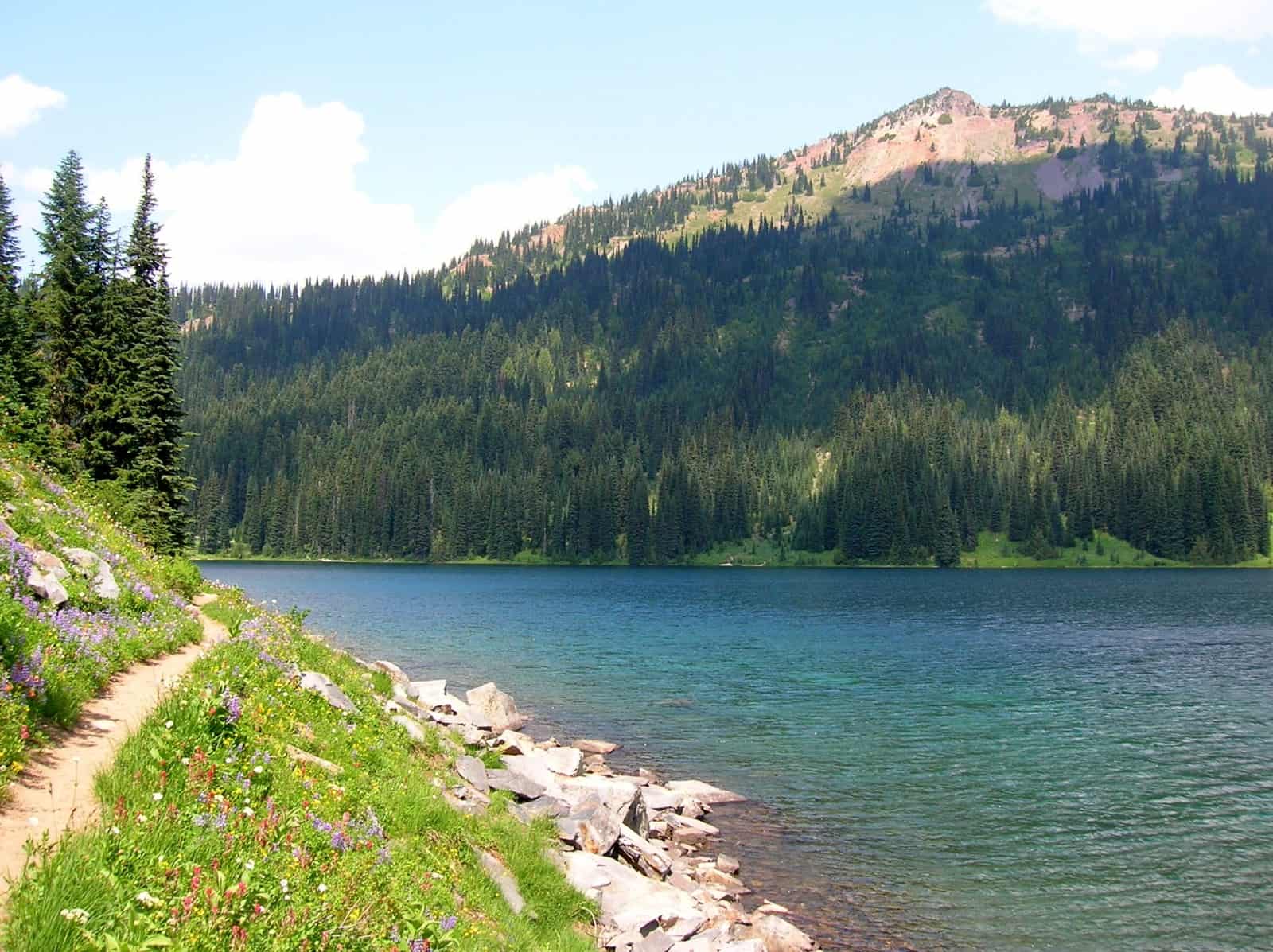 Can I hike the Pacific Crest Tail in a day?

The Pacific Crest Trail is certainly more than a day hike. Fortunately, hikers can opt for a few delicious bites at a time. One such stretch of trail is the hike to Dewey Lakes, a place we’d yearned to revisit after a magical backpack to the lakes years ago in an ethereal setting of clouds and mist.

Summer is passing too quickly for this hiker – in the shade, Western Pasque flower is still fresh but on sunny slopes they have already gone to seed and bear little resemblance to those along shadier sections of the trail. In late July, we were captivated by the beauty of emerging flowers amidst a few remaining snow patches on the trail and hillsides. By mid-August, the snow patches have melted and the Naches Loop is snow-free.

Heading south on the Pacific Crest Trail, the path curves around Naches Peak, passing recently melted out tarns and steep meadows shimmering with wildflowers. Shortly before reaching the Pacific Crest Trail/Mount Rainier National Park junction, there is an overlook of Dewey Lakes – the lakes look further away than they are. At the junction, (5,773 feet; N 46° 51′ 44″, W 121° 29′ 45″) the Pacific Crest Trail continues, dropping down to Dewey Lakes in about a half-mile with a loss of about 640 feet. For backpackers, most of the campsites near the lake are closed for restoration and you may need to camp further away from the lakes than you’d prefer. Hikers should also avoid walking through recovering areas; closed sites are posted.

If the thought of losing and regaining 643 feet or so elevation has little appeal and you decide to hike the Naches Loop instead, keep in mind you will be entering Mount Rainier National Park at this junction; dogs are not allowed inside the park. If you are hiking with your four-legged pal, continue on the Pacific Crest Trail or hike back to Chinook Pass the way you came.

Since Dewey Lakes was our goal we continued on the Pacific Crest Trail; just below the junction the trail enters the William O. Douglas Wilderness and drops down to the lakes. The lakes lie close together; the smaller lake at 5,131 feet, the larger lake at 5,130 feet. Either lake makes a great lunch spot or turnaround; we stopped at the little lake for a bite to eat. That big clunky mountain you see from the lakes is Seymour Peak.

If you want to extend the hike, continue on the Pacific Crest Trail as it contours above the larger lake. In late July there were still a few snow patches to negotiate near the lakes but as the trail pulled away from the lakes it was free of snow and in good condition, at least the first couple of miles or so from Dewey Lakes.

At 5,831 feet we passed a small tarn; we’d hoped to get to Anderson Lake though it was further away than we thought at the time. Given the marshy shore of the tarn and recently melted snow, we couldn’t decide to classify this little body of water as a lake or a tarn (we finally settled on tarn). After passing the tarn, the trail steepened with gentle ups and downs with a few views across the valley that separated us from SR 410. As is often the case, Time was moving faster than we were so rather than hurry we turned around at a stream crossing (5,432 feet) resigned to retracing our steps and regaining elevation back to the junction with the Naches Loop Trail.

As we retraced our steps we dreaded that elevation gain back to the Naches Loop but it went more easily than we imagined, so we rewarded ourselves by completing the Naches Loop trail rather than hike back the way we came. By staying on the Naches Loop (clockwise) we were hiking toward Mount Rainier rather than away from it and the views are wonderful, especially when mixed with more wildflower displays and pretty-as-a-picture tarns. A little past the junction the strange beauty of a tarn, more red than green with mineral-deposits puzzled us; that made for interesting photography.

As we continued on the loop we found more flowers in bloom including beargrass, phlox, hellebore with it’s deeply-furrowed, swirled leaves, magenta Indian paintbrush, even avalanche and glacier lilies where the snow had recently melted. The Naches Loop trail drops down to Tipsoo Lake – from there you can hike a short stretch of State Route 410 back to Chinook Pass or one of several (unmarked) trails that lead back to the pass. For us it’s easier to hike back to Chinook Pass along State Route 410 – social trails have made a mishmash of trails near Tipsoo Lake. For a more detailed description of the Naches Loop Trail refer to the Naches Loop trail report.

Stats: Dewey Lakes from Chinook Pass (hiking clockwise) is 5.4 miles round trip. It is about 1,050 feet of total gain to and from the lakes without completing the loop. If you complete the Naches Loop in addition to Dewey Lakes it is about 5.5 miles round trip with 1,343 feet of elevation gain.

How do you get to Dewey Lake?

Can you go swimming at Dewey Lake?

Yes. There is a small beach for wading and swimming.

Can you camp at Dewey Lake or nearby Anderson Lake?

Who is the land manager of Dewey Lake?