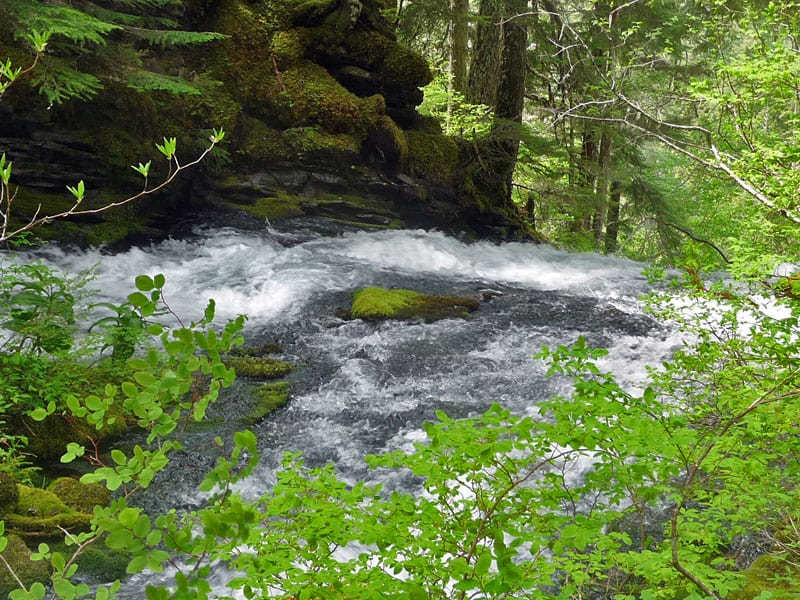 If an odyssey can be described as a long, spiritual wandering, the hike to Denman Falls could be described as such. Getting to Denman Falls is a long walk no matter what simile you’d choose to describe it. Since most of the West Side Road is gated to vehicles at Dry Falls (3.0 miles) you’ll either need to ride a mountain bike or hoof it. The mileage should not deter history or waterfall buffs as the overall elevation gain is reasonable.

Due to the West Side Road closure this region of Mount Rainier National Park is becoming the forgotten side of the park. The road closure creates solitude for those who seek it, but for some it’s a long haul accessing some of the most beautiful settings inside the park.

Hikers reluctant to hike roads will never see the classic, enduring road bridges built by the (Civilian Conservation Corp) nor will they likely linger at the nigh-forgotten Tahoma Overlook where more fine stone-work of the CCC can be seen.

For a while there was talk about a shuttle bus ferrying hikers to Round Pass where several good hikes begin. There was no shuttle; it is unlikely there will be. It is apparent to those who bike or hike the road that the road could be repaired – if funds were found and if Tahoma Creek promised never to flood again (unlikely, those big “ifs”).

In our search for historical sites, Denman Falls was at the top of the list – besides, we don’t mind hiking the West Side Road as there’s much to see including several historical points of interest.

From the gate at Dry Creek you’ll start out hiking beside Tahoma Creek. The creek has settled down since the floods of 2006 though you can still see the damage from those floods – dead trees rear up from sand and gravel bars, boulders and piles of sand resemble a war-zone.

We passed the inconspicuous trailhead where the semi-abandoned Tahoma Creek trail is marked by two cairns; about a half mile beyond is the still-signed Tahoma Overlook. There we stopped to admire the stone walls built by the CCC that designate the area, the walls gathering moss yet standing strong. Today the once-fabulous view is obliterated by trees.

Two miles from the Tahoma Overlook with its fine stonework is Round Pass (3,892 feet). As we hiked we stopped to admire wildflowers blooming beside the road including columbine, monkey flowers, yellow violets, trilliums, avalanche lilies, coltsfoot and Canadian dogwood. Adding a surreal touch is coming across road signs with 25 mph speed limits posted.

Round Pass is also the site of the Marine Memorial where 32 marines in 1946 crashed on The Mountain (their bodies never recovered) and nearby the trailhead to Lake George and Gobblers Knob. After viewing the memorial we took the Round Pass “shortcut” as that cuts off .6 miles of the West Side Road.

From the Round Pass trail hikers can return to the West Side Road or continue to the South Puyallup trail which leads to The Wonderland Trail. The Round Pass shortcut is a pretty stretch as the trail descends through forest with freshets and small waterfalls seemingly every few steps of the way. Boardwalks span small tributaries and Canadian dogwood nestles against the edges of weathered puncheon. Deer ferns, bracken and oak ferns border the trail, so lush you can almost hear the vegetation growing.

Back on the West Side Road we continued hiking coming to a colossal stone road-bridge over the South Fork of the Puyallup River. This bridge was also built by the CCC and designed to last forever. Here we lingered, peering down to the river as it rumbled and tumbled over boulders, the mocha-colored river bracketed by a green parenthesis of vine maples on both sides of the river. We looked about for a path down to the river for a closer view – there isn’t one.

The road continued with moderate ups and downs with ever-changing views – in places short cliffs alternated with undercut banks where the earth had eroded away leaving tree-roots dangling in space. In other places boulders from cliffs above had fallen onto the road and we also encountered a few fallen trees. After paralleling the South Fork of the Puyallup River the road gradually pulls away from the river as the road continued. We spotted animal scat here and there – bear and cougar; near one fresh pile, a few small bones. We felt like interlopers here and spoke to each other in soft voices, not wanting to desecrate the silence.

Not far from a big Douglas fir that had fallen across the road we heard the whoosh of running water and knew we must be getting close to Denman Falls. Since so little has been written about Denman Falls we didn’t know what to expect or whether or not we could even view the waterfall. No one had written anything that prepared us for Denman Falls though we knew we were close when we came upon another CCC-built wall along the road.

After rounding a bend we came to another road-bridge, this one spanning St Andrews Creek, the source of Denman Falls. It may take a stretch of the imagination to describe the road-bridge over Saint Andrews Creek – Grecian ruins come to mind as there is an ancient quality about the bridge. We were awestruck by the moss-etched stone-work combined with the might of Saint Andrews Creek (more akin to river than a creek in early July). Trail signs still remained in place, including signs for a .2-mile loop with an overlook of Denman Falls. Now imagine that once upon a time you could drive to this trailhead – imagine how few visitors visit Denman Falls today.

On the south side of the bridge, we descended stone steps built to access the loop and to view the handsome bridge from below. Here we admired the graceful arch of the bridge that was built to endure as evidenced by the “keystone” that holds the entire structure in place (nary a single piece had fallen). We continued down the loop trail as the din from Denman Falls grew louder, but no! Our progress was soon barred by a broken foot-bridge, marked with orange flagging to keep hikers away. Don’t even think about crossing here – the bridge is only a few feet away above the first drop of the waterfall.

We then approached the other end of the loop on the north side of the bridge. That trail was in good shape and leads to a designated overlook (3,652 feet) with a partial yet satisfying view of Denman Falls. The trail ends at the overlook though an unofficial boot-trail (it may have been a continuation of the original trail at one time) continues to two seldom-visited waterfalls, Ethania and Larrupin Falls. We thought the trail looked rough and potentially hazardous. Hence, we recommend you do not venture beyond the Denman Falls overlook.

Does the odyssey end here? Perhaps not – the West Side Road continues to other seldom-visited points of interest including Klapatche Point, the North Puyallup River Camp (this camp can also be reached via The Wonderland Trail) and the remains of another old highway bridge from the canceled road-around-the-park planned in the early 1900s.