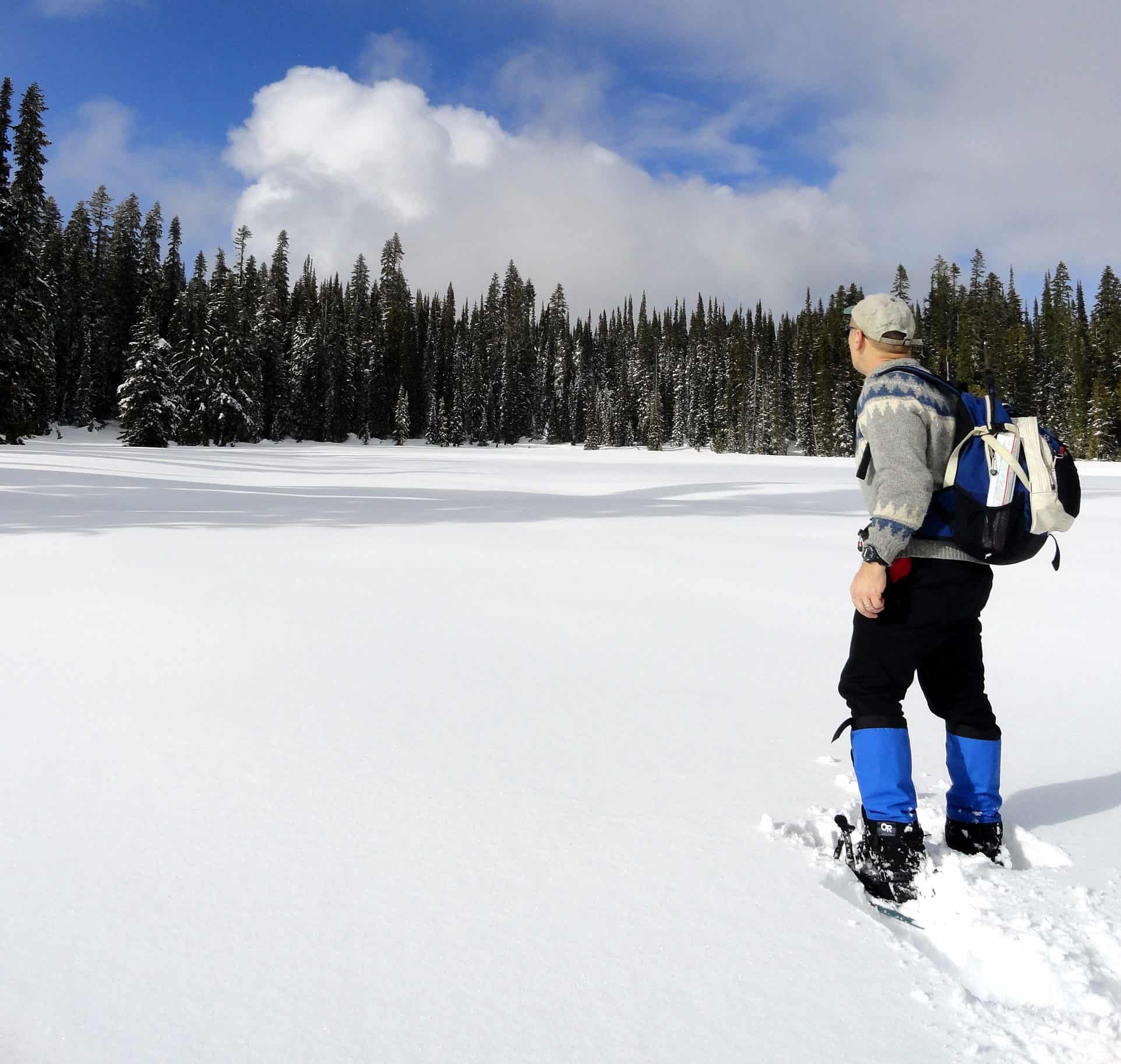 From Morton, follow US 12 east for 55 miles to White Pass. Turn left and proceed to the parking area near the Yurt behind the Village Inn Condominiums.

The route to Deer Lake is via the Pacific Crest National Scenic Trail (PCT), a 2,600-plus mile path along the Sierra and Cascade crests from Mexico to Canada.

The preferred starting point for this snowshoe trip is from the White Pass Nordic Center where there is ample and safe parking. The center offers snowshoe rentals too if you don’t have your own pair. However, if you use the center’s trails on Thursdays through Sundays and holidays, you’ll need to purchase a trail pass. Note too that dogs are not allowed on the center’s trails before 3:30 pm. If you opt to start on the PCT where it crosses US 12 at White Pass, it is best to park at the ski area and carefully walk along the road to the trail.

From the Nordic Center follow the signed snowshoe trail north crossing a couple of ski trails (be sure not to walk on the ski tracks) .1 mile to Leech Lake. Then turn right and walk along the pretty lake coming to a junction with the Lake Loop Ski Trail at .7 mile. Now turn left and walk along the edge of the ski trail crossing a bridge and shortly afterward coming to the Pacific Crest Trail at a major ski trail junction. Marked by a big brown sign, you can’t miss it!

Now head north on the famous long-distance trail passing a kiosk and registration box (no wilderness permits needed in winter) that will more than likely be half-buried in snow. Except after a heavy snowfall, the route should be fairly easy to follow as it is a pretty popular trip. Never-the-less, it may be difficult locating blazes denoting the way, so it’s always a good idea to have a map on hand. The way makes a sweeping switchback left and then one right gently climbing up a thickly forested slope graced with a few old-growth giants.

At 1.2 miles cross the Kendall Konnecter ski trail and continue climbing. The trail soon eases following along a gentle shoulder shrouded in hemlocks and firs. You’ll come within eyesight of the Dark Meadows Ski Loop before veering away left and slowly climbing again. At 1.9 miles enter the William O Douglas Wilderness. Named for a Yakima famous son, Douglas served as an Associate Justice of the United States Supreme Court for 36 years. Appointed in 1939 by President Franklin D. Roosevelt, Douglas sat on the court until his retirement in 1975 during the Ford Administration. His term is the longest in Supreme Court history. He was a champion of civil rights and the environment, and he once hiked and rode horses through the 168,000-plus acre wilderness named in his honor.

Just beyond the wilderness boundary, you’ll come to a junction with the Dark Meadows Trail which heads right 1.6 miles to Dog Lake. It makes for a nice alternative approach. To reach Deer Lake, continue straight on the PCT rounding the head of a small ravine fed by several tributaries to the South Fork Clear Creek. The trail traverses a short steep slope and then bends left to make a short climb to a broad ridge.

Continuing in attractive forest the way skirts pocket meadows to the left before skirting a nice small meadow to your right. The route then briefly reenters the forest before popping out upon a wide-open area. Here at 3.0 miles you’ve reached Deer Lake-but you’d never know it in the dead of winter. It appears more like a big frozen meadow. Surrounded by towering subalpine firs the scene is quite serene. Wander around the lake basin leaving your tracks in freshly fallen snow-and look for the tracks of those that have passed before you, both two and four-legged travelers. You won’t get any alpine views here, but the subalpine forest embracing the lake and open basin blanketed in white are quite visually appealing.

Most snowshoers call it a trip at Deer Lake. But if you are savvy at wilderness navigation and want to continue farther, continue north on the PCT for a virtually level half-mile to Sand Lake. This little body of water is much smaller than Deer and in winter will appear pretty much as a small snowy opening in the surrounding old-growth forest. There’s an old shelter nearby that you may want to locate, but you probably won’t want to stay in it. However, if you are interested in camping; both Sand and Deer Lakes make great destinations for trying out winter camping. Experienced and well-equipped backcountry travelers can continue even farther north across a broad plateau dotted with small lakes and peaks.

Once you’re content exploring Deer and Sand lakes, return the way you came. Upon reaching Leech Lake; either retrace your initial approach or turn right and return to the Yurt via the northern shore of the lake. If you opt for this route, it adds a mere .3 mile to the trip and provides some nice views of Spiral Butte and the White Pass Ski Area.

Q: Can I take my dog with me to snowshoe to Deer Lake?

A: Yes, because the trail is part of the Pacific Crest Trail, dogs are allowed. Please remember to practice leave no trace principles and clean and remove dog waste responsibly.

Q: Who can I call if I have questions about Deer Lake?