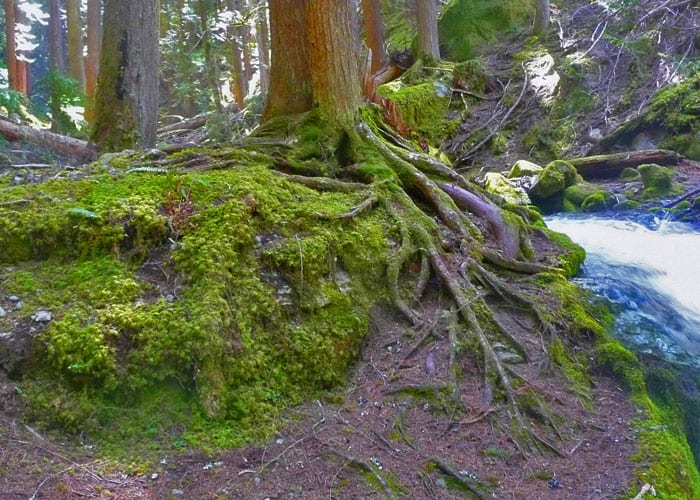 Longer days and melting snow means hikers can spend more time on higher, longer and steeper trails. If you think you need to get in better condition for more strenuous hikes the Deep Creek trail provides not only a good work-out – it’s also a sweetly-scented wildflower sampler. This is a trail that you can hike as little or as far as you’d like, including a junction with the Noble Knob trail when the Corral Pass Road is still snowbound. In early spring/early summer most hikers are content to hike the Deep Creek trail as far as stamina and conditions allow (Deep Creek trail is the most strenuous approach to Noble Knob).

In May we expected to encounter snow well before the junction with the Noble Knob trail so we started from the White River (Trail No. 1199) trailhead on State Route 410. This trailhead also provides access to the Ranger Creek Trail.

Though the Deep Creek trail is a thigh-burner there are advantages starting from State Route 410 – it’s an easy, pleasant two-mile hike from there to Deep Creek. En route you’ll cross Ranger Creek and Dry Creek before you come to Deep Creek for which the trail is named. Streams are running high and swift from snow-melt; we were glad for the footbridges, all of which are in good condition.

Another advantage of starting from the highway is the burgeoning array of wildflowers; many already in bloom; others are just waking from winters sleep. We spotted stream violets, vanilla leaf, rattlesnake plantain and trilliums at lower elevations.

From SR 410 walk up the bank a few feet to the White River Trail (signed). The left fork leads to Camp Sheppard and Snoquera Falls, turn right (east) for Deep Creek. You’ll soon reach another signed junction – turn right and cross bustling Ranger Creek on a footbridge. After crossing Ranger Creek the trail contours above the highway through the shady forest then traverses a short talus slope dotted with a few vine leaf maples just leafing out in tender shades of green.

We also noticed clumps of yellow stream-violets nestled near the streams. There’s nothing prettier than a fresh cluster of stream violets to herald spring and celebrate the melting snow. Stream violets, (Viola glabella) are a common perennial though there is nothing common about their beauty and grace. They bloom April through July in various settings and elevations. Their habitats range from forest, marshy areas, and moist meadows.

There are about 80 species of violets in the United States. According to mythology Zeus (the primary Greek God) fell in love with Io, a nymph. To hide Io from his jealous wife, Hera, he changed Io into a heifer but Io could not eat the grass and began to cry. Hence Zeus changed her tears into flowers which later were called violets (there are variations on this legend; this one is our favorite). Violets are also considered a symbol of modesty – Shakespeare often included violets in his love sonnets.

After crossing the talus slope the trail returns to the forest then crosses Dry Creek on another footbridge. Dry Creek was anything but dry – it was running so high at first we mistook it for Deep Creek until we took another look at the map.

In about ½ miles past Dry Creek, you’ll skirt a few cabins and come to the junction with the Deep Creek trail on the west side of a footbridge. Deep Creek is the most dramatic of the three streams, swollen with snow-melt as it tears down the mountainsides, tumbling in short, furious cascades, forcing its way between eroding banks where exposed lattice-like roots of ancient trees clutch air, forming deep, frothy pools studded with dark boulders before it joins the White River on its timeless journey into the lowlands.

This is such a spectacular setting you’ll want to spend a little time; it’s also an opportunity to refill your water bottles before you head uphill. We carried four quarts of water and drank almost all of it before we got back to the trailhead.

As of this writing, the trail sign for Deep Creek is lying on the ground beside Deep Creek. If you cross Deep Creek on the footbridge you’ll come out at another trailhead for the White River Trail on Forest Service Road No. 7174 (Corral Pass Road).

The Deep Creek trail immediately starts climbing; some stretches are very steep. We’d hiked this trail in the 1990s and through much of the trail lies within forest we were anticipating revisiting the viewpoints of the White River Valley we remembered. Since that visit the trees had grown taller (funny how that happens); there are only partial views out to the White River valley and Mount Rainier.

As we progressed we discovered the trail had been rerouted through or around blow-downs though the trail is in good condition. In about a half mile from Deep Creek, we reached an unsigned path to an overlook at the end of a switchback though the views were partially obscured by trees. Nevertheless, it still makes an attractive setting for a snack or water-break.

Just about the time we thought we should be getting to the junction for the Noble Knob trail we began to encounter snow. The snow soon grew deep enough to obscure the trail and warrant old-fashioned route-finding skills – out came the surveyor’s tape as we continued through the forest, looking for clues such as avenues (clearings) between trees and stumps, old tracks, and cut logs (remember that if you “flag” a route to take the flags down on your way back). Still, we carried on, lured by growing patches of blue sky between the trees – these patches of sky are often called “sucker holes” because they sucker the hiker to keep going!

Hopes were dashed as the snow slowed our progress. Though there were faint tracks where others had hiked it was what we call “crummy” snow, covered with pine-needles, twigs, icy in spots and soft in others. We carried on for a while but when we began to post-hole we opted to turn around. We’d already gained 3,750 feet – that was far enough given the conditions.

Though we had to turn around we don’t consider any hike a failure. Late spring and early summer hikes are looked upon as “snow-line probers” by experienced hikers. Then hikers know they are apt to encounter snow before they get to their destination. Some doughty hikers switch to snowshoes then; others carry on as best they can without snowshoes if there is no avalanche danger, snow is firm and they are not post-holing too frequently (post-holing is when you break through the snow). From where we stopped it would have been about another mile and 600 feet of elevation gain to reach the junction with the Noble Knob Trail.

We retraced our route, stopping again at peeks of the White River Valley and taking the time to identify and photograph the flowers we passed on our way.

Additional information: A Northwest Forest Pass is required. This trail is also open to mountain bikes and equestrians. The maps are Green Trails No. 238 Greenwater and No. 239 Lester. For additional information on this trail and other approaches to Deep Creek and/or Noble Knob refer to the maps or call the Mount-Baker National Forest (Enumclaw district) at 360-825-6585.