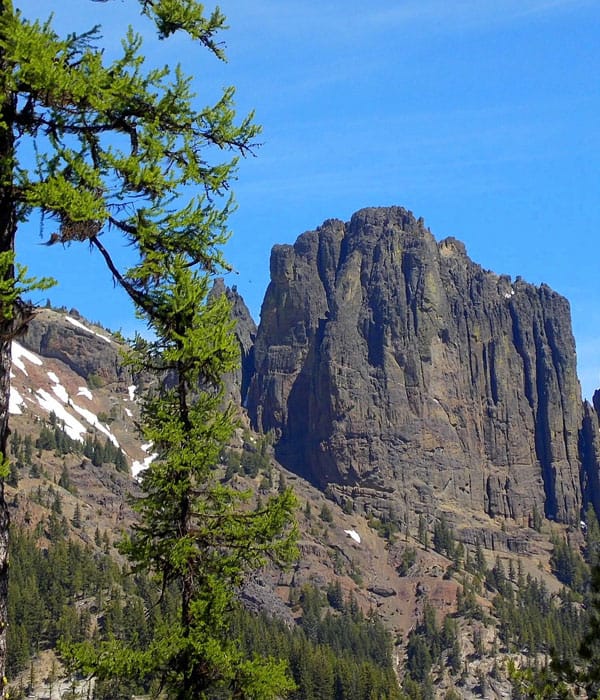 Now here’s a trail to crow about; you’ll sing for joy when you get that first glimpse of Mount Rainier peeking over the foothills and the formidable pinnacles and spires of Fife’s Peaks. (For that matter, you can even get a nice view of Fife’s Peaks from the interpretive display at the trailhead.)

More reasons to sing – since the trailhead is east of Chinook Pass the weather is almost guaranteed to be better than on the west side of the pass. Plus, the trail is in good shape thanks to the Okanogan Wenatchee National Forest and the Backcountry Horsemen of Washington who maintain the trail and trailhead. Whether you boot it or ride it, this is a magnificent trail, well-graded and with plenty of views along the way.

If you run out of trail before you run out of energy, there are other options in the Norse Peak Wilderness including lakes (Crow Lake, Sheepherder Lake, Basin Lake) and connections to other trails.

After a few lazy, forested switchbacks bordered with wild strawberries, Calypso orchids, vanilla leaf and Oregon grape, the trail grows stern as the grade grows steeper. You’ll be thankful for the sun-dappled, cool forest as this trail can get hot in the summer.

At about two miles there are peek-a-boo views of Fife’s peaks and pinnacles through the trees; this is also a good spot for a water break. When we look at West Fife’s Peak, we marvel that we’ve climbed it and hope to climb it again someday. However, climbing or scrambling any of these peaks and pinnacles are not recommended for hikers without route-finding and scrambling skills. Though Fife’s West Peak is not considered a “technical” peak, a fall from the peak could be lethal.

Our goal was to get to the base of West Fife’s Peak where a climber’s trail leads to even more dramatic views.

As we adjusted our pace to the steeper grade we rejoiced in the pine-scented forest and listened to the twitter of hidden birds. You’ll notice as we did, a variety of pine cones beside the trail ranging from fat and round to long and slender with silver tips. Trees included Douglas firs and Alaska cedars.

As we rounded a switchback we heard a porcupine nearby; if you have never heard one you will be amazed at the cacophony they create. The sound is just about impossible to describe, an odd combination of growling, moaning, hooting, singing and barking.

Not wanting to have a close encounter with a porcupine we kept going and soon reached the first viewpoint (there are several). There we enjoyed views of neighboring ridges and the glint of the American River below winding through lush, green lowlands. Watch your step if you venture out onto the rocky overlooks. You’ll need to gain more elevation before Mount Rainier comes into view.

Though it was still too early for most flowers, we noted the rocks at the overlooks are brightly adorned with stonecrop. Also note as you walk along the trail, the weathered root-balls of trees that resemble giant pinwheels, some dashed with neon-green swatches of lichen. See if you can spot the horseshoe nailed to one of the root-balls; folklore has it that if you find a horseshoe pointing up it means good luck but if it points down, it means your luck has run out.

We were not pleased to encounter our first snow patch. That first snow patch often heralds the beginning of the end of snow-free hiking. We are not afraid of hiking in the snow but dislike it in spring/summer because it makes route-finding more difficult, especially in the forest where snow tends to linger. As we picked our way through the snow patches we met a couple who had also lost the trail the previous day – they’d originally planned to camp at Sheepherder Lake but ended up having to camp off-trail.

Given the snow we changed our destination to Grassy Meadow (named by the late author and trail guru Harvey Manning). Grassy Meadow is a large meadow below Fife’s Ridge often filled with wildflowers when the snow melts, a good turnaround with views.

When Grassy Meadow came into view it didn’t look promising; we spotted the trail below in a gully where it crossed a stream partially covered by a snow-bridge. Part of the snow-bridge had already collapsed and we saw where others had crossed, their boot prints perilously close to where the snow bridge had broken. We could have continued cross-country to the meadow but were weary of trudging through the snow and instead followed a game-trail that promised to go “somewhere.” Well, for some hikers, “somewhere” is the call of the wild that must be answered and since that trail was snow-free we checked it out, saving the base of Fife’s West Peak for another day.

The game-trail (or path) parallels the main trail and appears to be used by hikers who over time followed the least line of resistance to avoid hiking in snow.

A short descent on the game-trail led to a natural rock garden near a small spring, an ideal lunch spot. Below lay a pretty basin we yearned to explore but there wasn’t enough time to do so. Topographic maps and Green Trails map both show this basin as the head of Survey Creek. Since Survey Creek originates in this basin we are taking the liberty of calling it Survey Creek Basin. There we saw more rock formations and pinnacles that you can’t see from the main trail – others have also discovered this basin as evidenced by paths leading hither and yon.

On our way back to the main trail we were mesmerized by a ring around the sun (often called haloes). Rings around the sun are not all of a kind – in essence, rings are an optical phenomena caused by ice crystals creating colored spots in the sky. The shape and orientation of the crystals is responsible for the type of halo you see. The crystals act like mirrors and prisms, refracting and reflecting sunlight, sending shafts of light in particular directions. Before meteorology was developed as a means of interpreting weather such phenomena was used as an empirical means of forecasting weather. There are several names for halos, rings and similar weather-related phenomena but differentiating them is beyond the scope of this article.

If you spend time in the mountains you’ll eventually be treated to this fleeting, shape-shifting, spectacle (don’t worry about the proper name for such phenomena – enjoy the show). Eventually, the ring faded but the sky remained dramatic as we retraced our route – we stopped again at viewpoints to watch the ongoing drama of whale-shaped white clouds drifting toward Mount Rainier.

Getting There: From Chinook Pass continue east on SR 410 to the signed trailhead and facilities (about 12 miles east of the pass). A Northwest Forest Pass is required.

Additional information: The map is Green Trails No. 271 Bumping Lake. Fill out and attach a Wilderness Permit to your pack to enter the Norse Peak Wilderness (available at the trailhead) before you hit the trail and carry plenty of water.