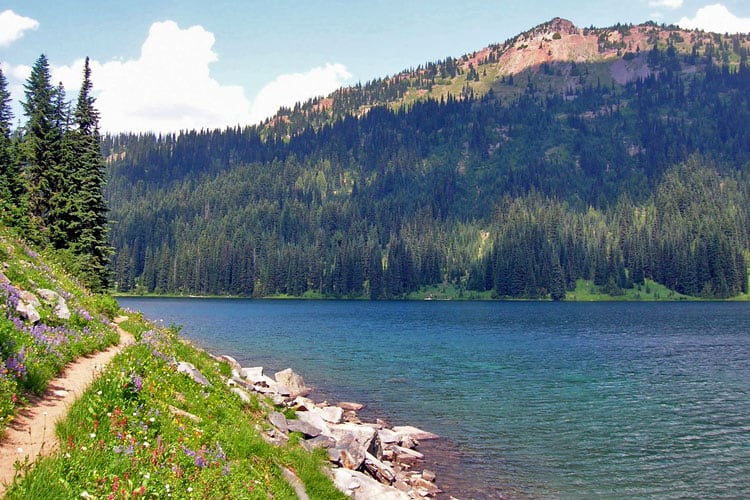 Starting from Chinook Pass at an elevation of 5,400-feet, hike the Pacific Crest Trail along Mount Rainer National Park’s eastern border to lakes and viewpoints seldom visited by the park’s millions of visitors. Explore not only gorgeous lakes, but quiet meadows and high basins flush in wildflowers and wildlife. This is not the shortest route to the Cougar Lakes, but it’s the most interesting.

From the large parking area at Chinook Pass, follow the PCT south crossing SR 410 on a park gateway bridge and soon enter the William O. Douglas Wilderness; a sprawling area of over 165,000 acres named for the Yakima son who was the longest serving justice in the history of the Supreme Court, and an ardent conservationist.

Traversing meadows and crossing creeks-and probably a few lingering snow patches too-pass a lovely tarn tucked beneath craggy Naches Peak. Views are excellent here east down the American River Valley. Look for mountain goats, marmots, bear and elk. This entire hike traverses excellent wildlife habitat-much of it subalpine forest and meadows. The way never drops below 5,000 feet. Count on cool nights on this trip-a welcome not only for sounder sleeping, but in also keeping the bugs at bay around the campsite.

After 1.5 miles of pleasant walking, reach a junction with the Naches Loop Trail and a splendid viewpoint overlooking large and shimmering Dewey Lake. From this point onward, you’ll notice a huge decrease in accompanying hikers. Most of the folks you have met so far on the trail are only interested in doing the 3.2 mile Naches Peak Loop.

Continue south (left) on the PCT and begin dropping down to Dewey Lake (el. 5,150 feet) set in a wide basin and graced by old-growth forest and flowered meadows. At 2.7 miles reach a junction. The trail left leads along the lake’s northern shore before following the American River east to the Mesatchee Creek Trail. It is popular with equestrians.

There are good camps along the lake’s north shore and outlet. They can be popular on the weekend. Quieter camps wait at the Cougar Lakes. Stay right at the junction on the PCT passing a small mosquito-incubating pond on your right before hugging the south shore of beautiful Dewey Lake. At 3.6 miles reach another junction. This trail connects with the one following the lake’s north shore at the lake outlet. There is an excellent sunny swimming spot just a few steps left from the junction. Take a rest and a dip or keep hiking.

From here the PCT gently climbs, skirting small tarns and traversing majestic groves of old-growth forest. The way also travels through pocket meadows painted with dazzling blossoms in summer, and huckleberry patches that harbor plenty of succulent fruit come fall. After cresting a 5,450-foot ridge slowly descend and reenter Mount Rainier National Park. At 5.7 miles reach tiny and remote Anderson Lake (el. 5,350 foot) where a small campsite (no park permit needed) can be found by a meadow. Anderson Lake is one of the headwaters for Deer Creek which crashes over a series of falls far below near SR 123.

Beyond the lake basin, the way climbs, rounding a knoll with views out to Mount Rainier. Then it crests a 5,650-foot ridge and reenters the William O. Douglas Wilderness in a marshy draw reaching a junction at 7.2 miles. Turn left here onto the American Ridge Trail and after .6 mile reach pretty American Lake tucked in a small cirque on House Rock. There are excellent camps here offering a good base if you want to set up and then continue to the Cougar Lakes on a day hike.

To get to the Cougs continue east another .8 mile reaching a junction (el. 5,050 feet). The American Ridge Trail continues left shortly coming to the Swamp Lake Trail; which provides access from the east to the Cougar Lakes. This is the way most folks come to visit the Cougs. Swamp Lake, one mile away, is actually a nice lake with good camps offering yet another alternative spot to base.

The Cougar Lakes are reached by heading right one mile on the Cougar Lakes Trail. Crest a 5,400-foot ridge and then descend over rocky terrain reaching Little Cougar Lake (el. 5,000 feet). There are excellent (but popular, especially in the fall) camps near the lake’s eastern shore complete with viewing out to impressive House Rock housing the lake. Elk frequent this semi-open basin-and not surprisingly, cougars too.t Look for the sign and listen for activity. In mid-fall bugling elk add an eerie background score to the basin. For more private camps follow a trail .5 mile west along the small rise separating the two lakes to developed sites near Big Cougar’s inlet.

Campsites are marked. Do not camp in areas closed to camping, as the Forest Service is trying to restore and rehabilitate the shoreline-especially the narrow divide between the lakes. There are plenty of choice places that are open to camping, and you shouldn’t have too much trouble finding one. Hang out at the lakes for a day or two. Explore other nearby lakes mentioned, or consider following a rough, highly scenic, adventurous 1.8-mile route back to the PCT from Big Cougar. It climbs steeply out of the lake basin along cascading creeks, across heather meadows and up flowering slopes to a high draw (el. 5,950 feet) on the Cascade Crest before descending slightly to the PCT. The way is a little brushy, but generally in good shape with minimal route-finding difficulties. You can then head back north on the PCT reaching the trailhead in 9.2 miles, or continue south and keep exploring, perhaps venturing to One Lake, Two Lakes, or Three Lakes. Three Lakes lies within the national park, so your dog won’t be able to accompany you. The other two destinations, however, are dog-friendly and often pretty void of visitors-but not of wildlife!