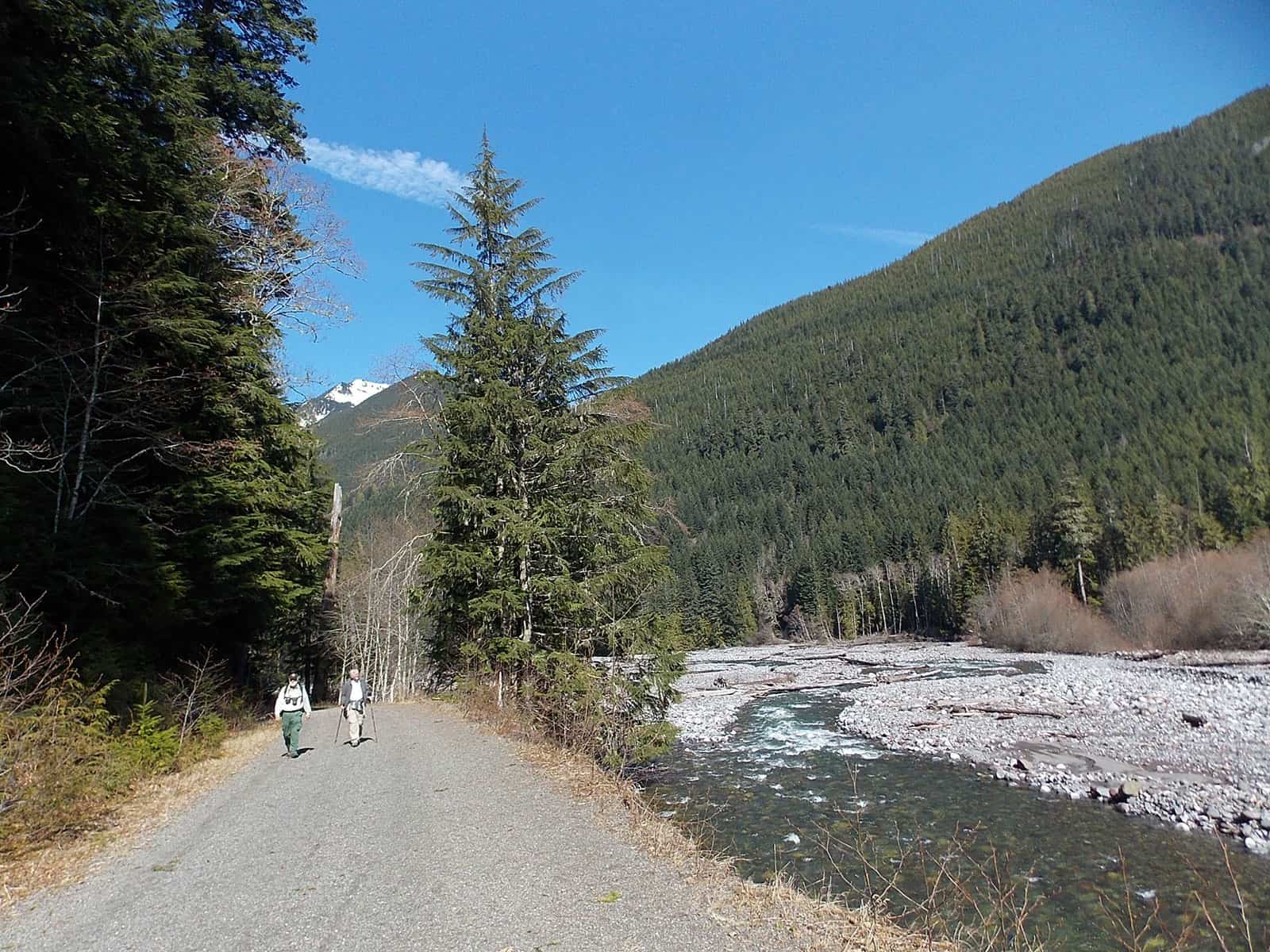 From Carbon River Road to junction of The Northern Loop Trail

No matter how often we’ve driven or walked the Carbon River Road from the Carbon Entrance of Mount Rainier National Park we always look forward to it with anticipation. It may be the same road, but trails and roads are living entities that change as a result of time, weather phenomena and man-made changes. A bridge may be out, a new bridge put in elsewhere or an old trail given new life

We parked inside the Carbon River entrance and hit the road at a leisurely pace (the road is closed to vehicles but is open to bicycles). Being a weekday, there were few cars at the trailhead; a bicyclist was just getting ready to bike to the Green Lake trailhead, another couple were hiking elsewhere.

First thing we noticed was that Coltsfoot and skunk cabbage were already in bloom. Coltsfoot might not be the showiest flower in the floral-world but it’s one of the earliest and we’re always happy to see it. What a change since the floods of 2006 destroyed big chunks of the road. Though the road walk is easy and without difficulty, you can still see vestiges of the floods that violently rearranged this river valley below the Carbon Glacier.

It was a sunny day and though the road is bordered with old-growth forest, sunlight finds a way to gild the mossy branches of gargantuan trees with golden highlights as shafts of sunlight filter through the forest canopy. Since it was early in the morning mist was rising from the cold earth as the sunlight reached it.

In 1.2 miles we passed the trailhead parking lot for the Washington Mining and Milling Company Mine Trail (since no vehicles are allowed on the road, the empty parking area adds a touch of surrealism. The hike is a steep ¼ mile to the site of an old copper mine. (The mine is gated to keep curious people from venturing inside)

In about three miles the road breaks out of the forest as it approaches the Green Lake trailhead (right) and the trail to Chenius Falls (left). In early spring, alders haven’t leafed out yet so views of the Carbon River are pretty along this stretch of the road with a couple picnic tables, an interpretive sign and a sign that bridges are out on the trail. There are three bridges that span the river – the first two are still in place and safe to cross. The third has not yet been put back into place so save Chenius Falls for a trip later in the season (you can’t see the waterfall from the road).

We counted foot-bridges – there are nine in total from the beginning of the road to the connection with the Northern Loop Trail on The Wonderland Trail. All are in good condition, all have a hand rail.

At Ipsut Creek we took the 200 foot spur to Ipsut Falls but it was too dangerous to venture close for photographs. Of course, that means it’s the most interesting time to see it, when it’s flowing unabated. In summer it thins to a trickle. Back on The Wonderland Trail we continued on toward the Carbon River suspension bridge to see if we could get there before an established turnaround time. From there the suspension bridge, according to the trail sign, was another 3.3 miles.

As we continued we especially relished the wilder feel of this section of the trail. Here you can see more piles of debris from the 2006 floods, several tributaries are crossed on footbridges (all with rails), each one a different personality. The Carbon River was running at a leisurely pace as were the tributaries we crossed on the footbridges; nearby seeps glittered with a variety of moss, some golden, others emerald green. To the point of the 9th bridge we had not encountered snow but we were getting hungry so found a sunny spot and settled down to eat.

My companions opted to sit in the sun and rest as I carried on, still hoping to get to the Carbon River suspension bridge. We’d tried to get that far a couple years prior and were stopped by a washed-out stretch of trail and a trail closure sign. There was still a sign at the Ipsut Creek campground and The Wonderland Trail with a sign warning hikers that the trail was closed ahead due to a bridge out. Hence, as I’d promised to turn back in 25 minutes no matter how far I was able to go so I lightened my pack and started out again at a good pace.

From the sunny lunch-spot the trail climbed at a moderate grade with views of the river, steep meadows (right) that would be fraught with avalanche danger when snowy, big trees and willows about to leaf out. It was a huge, lonely place.

I crossed a small but stable rock-slide on the trail and one snow patch but the snow was soft. Soon I was back on dirt and hoped to make the destination but alas, all too soon I came to the trail junction where we had been turned around on our last hike. Here, the trail to the Carbon Suspension Bridge/Glacier remains posted as closed (part of the trail is still washed out). This is also a junction with the Northern Loop so with a few minutes to spare I followed that a few feet.

Regretfully, I retraced my route once again and found my companions still clinging to their shrinking patch of sunlight. Admittedly I was disappointed I hadn’t the time to continue because the trail looked snow-free beyond the Northern Loop/Carbon Glacier Trail junction but one of the Golden Rules of hiking is to stick with an established turnaround time, no matter what.

On our return, although our feet were tired, we hiked the Rain Forest Nature Loop since our friend had never seen it and we wanted to show him the golden “swamp lanterns”, as skunk cabbage is popularly known. We also noted the boardwalk is very slippery; so watch your footing.

All in all, it was an inspirational but tiring day and well worth the effort. There’s no such thing as a bad day in the mountains.

To get there: From Wilkeson drive to the Carbon River entrance of Mount Rainier National Park and continue to the end of the road, facilities, campground and trailhead parking. Park entry fee (or pass) required. The map is Green Trails No. 269S Mount Rainier Wonderland. Hikers that want to camp at Ipsut Creek campground still will need to obtain a backcountry camping permit.