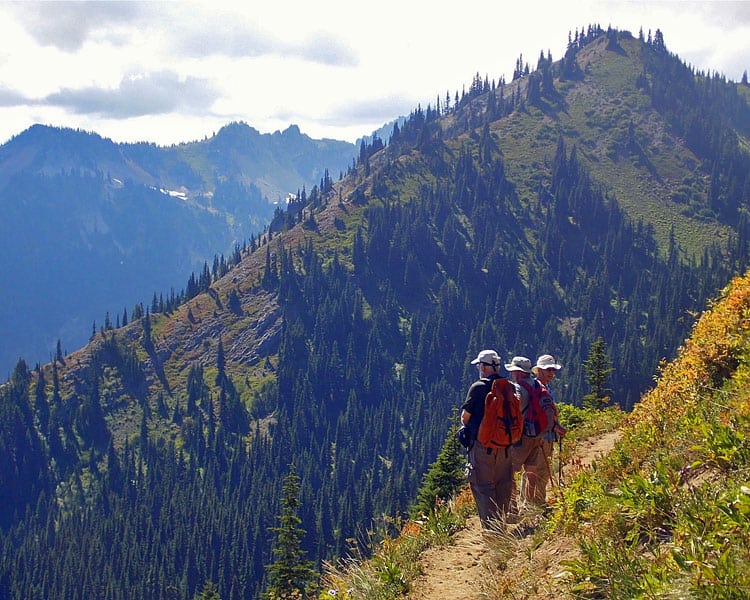 It’s getting to be that golden time of year; though fall is imminent summer is reluctant to leave and has been especially generous with late-summer wildflower displays. It’s safe to say that this fall the wildflowers are confused when it comes to blooming; magenta paintbrush is still going strong yet there is a tinge of red in vegetation along the higher ridges. You’ll enjoy the blend of seasons on the Bullion Basin Trail.

Once on the Pacific Crest Trail we headed south (with many ups and downs) to an unsigned junction where another trail headed uphill. Unsigned trails intrigue us so we took that trail and after a short climb came upon a few mining artifacts in a setting conducive for a lazy lunch with views toward Fife’s Peak and Mount Adams further to the south. We also found mine tailings nearby. Here we lazed and watched marine clouds dissolve like smoke above us as they headed east.

After lunch we hiked back to the Pacific Crest Trail and continued our journey with rolling ups and downs while enjoying views through small meadows bordered with late-summer flowers – hellebore, asters, mountain daisies, arnica, lupine, even some magenta paintbrush.

The trail descended to Pickhandle Gap (not signed) with good views down into Pickhandle Basin (north) and south toward Mount Adams. After more ups and downs we came to Bear Gap which is signed though the signs are not much help. This is a five-way junction with some trail signs so weathered they are illegible. Hence, a map is a must! With the map we knew which trail to take to Henskin Lake, a lake that had long piqued our curiosity. So far we haven’t been able to figure out why Henskin Lake is thusly named. On our way down to the lake we passed meadows and boulder gardens, listened to the warning whistle of a marmot and watched a chipmunk sitting still as a statue on a sun-drenched boulder.

The lake was larger and prettier than we anticipated though trail reports indicate the lake can be “buggy” in summer. The lake is set within a lovely site of green grasses, reeds and evergreens with views toward Three Way Peak (elevation 6,796 feet). We agreed it was a setting that needed an elk or at least a deer.

At the north end of the lake we found a mass of freshly-hatched, wriggling polliwogs and paused to watch their antics as they darted about, disengaging themselves from each other.

After leaving the lake we stayed on the main trail (more akin to a service road than a trail) until we reached the top of the ski lifts (N 46° 55′ 12″, W 121° 29′ 01″). There we opted to hike under the ski lifts beside the service road – that is where most of the wildflowers were still in bloom. There we saw clumps of Pearly Everlasting studded with brick-red Indian paintbrush and purple asters. Mixed in with the flowers were dark alpine sedges in meadows turning gold.

Getting there: From Enumclaw head east on State Route 410 to the well-signed turn-off to Crystal Mountain Resort, continue to a parking lot near the main lodge.

For additional information (including updates on forest fires) contact the Okanogan-Wenatchee District (Naches) at 509-653-1401 and/or Mount Baker-Snoqualmie National Forest District (Enumclaw) at 360-825-6585.