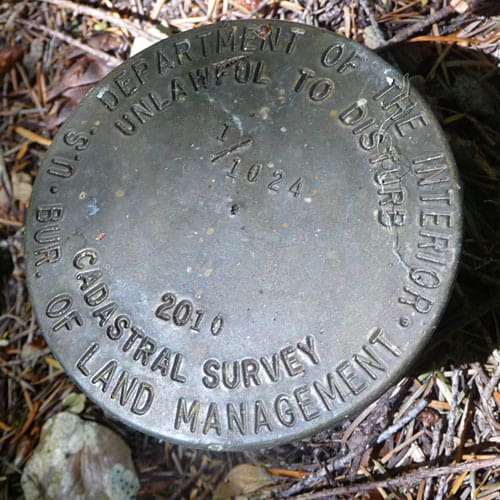 Let’s just put it out there — this trail might not suit all hikers. Trails like the Boundary raise more questions than answers, but for many of us, that’s part of the fun. Following old trails is like solving a riddle – you never know what you’re going to find along the way.

It had been many years since our last visit, but when we heard that volunteers were restoring sections of this trail, we made plans to return. And after hearing the first couple miles of the trail were easy to follow, our plan was to follow the trail as far as we could. Perhaps there’s a part of us that never grew up or spent enough time exploring the outdoors when we were children. No matter the reason, some hikers pine to follow forgotten trails.

This hike takes you along a lovely stretch of old trail that once bordered the park. And since this trail is not well-known there is no trailhead or trail signs. After you enter the Nisqually Entrance of Mount Rainier National Park, ask the ranger at the entry station if you can park in the nearby service area; most likely they will say “yes” if you tell them you are hiking the Boundary Trail.

After a few steep steps (the building will be on your left) you’ll reach a metal sign stating “trail is not maintained” though be advised, park rules and regulations still apply. The trail stays steep as it climbs away from the building into the forest and is initially easy to follow. As we climbed I recognized vestiges of a climbers’ trail we once followed to Mount Wow though we kept to the “new” trail. The “new” trail is indicated by metal trail signs beside the trail reading “NPS Boundary”. In essence, the Boundary Trail still borders the park though many sections are lost to Time.

You will pass benchmarks, including one dating back several years and more recently one placed by the United States Geodetic Survey (USGS). My partner marveled at the accuracy of the old benchmarks as they were “right on.” Remember, back in the old days surveyors worked solely with map and compass. A benchmark is a fixed point marked by a round, bronze marker. Benchmarks are used by surveyors and mapmakers to show fixed points to give precision to the drawing of boundaries and property maps.

After a bit of climbing through the old-growth forest, the trail descends to Tenas Creek (2,290 feet, N 46° 44′ 57″, W 121° 55′ 07″), spanned by a rotting piece of puncheon that probably dates back to the early 1900s. Hikers who enjoy exploring abandoned trails consider old puncheon “gold.” Puncheon is a short upright framing timber or a split log with the face smoothed. When you come across old puncheon, cut logs or old blazes on trees, you can’t help but wonder who placed them and when.

It’s easier to step across the creek than attempt to balance on the puncheon as it is slanted and the old wood is slippery. On the other side of the creek, you’ll need to maneuver to avoid brushing against encroaching Devils club and salmonberry.

After crossing Tenas Creek the trail begins to climb and doesn’t relent. The trail was still mostly easy to follow but where the trail was faint we placed a flag (flagging is never encouraged; if you must do so to mark a route be sure to hike back the way you came and remove the flagging on your way out). A flag is a strip of brightly colored surveyors tape.

A little further along we came to a large blowdown across the trail – fortunately, the trees were spaced far enough apart that we were able to step over them with ease and not lose the trail. n

By then we knew we were not going in the right direction for Mount Wow but our curiosity egged us to continue on the Boundary Trail as far as we could get. The further we hiked, the fainter the tread. The combination of infrequent hikers on the trail plus storm damage that is not repaired makes such trails sketchy and more challenging to follow.

We began to see the sky through the forest canopy as we approached a ridge and hoped for a view (we were still following “NPS Boundary” signs). Once we reached the forested ridge our options dwindled; to the left was what may have been a viewpoint once upon a time but that was overgrown. To the right, a rough trail continued in the direction of Mount Wow though we could not discern how far away we were from the peak. We headed that direction anyway, following the ridgeline, threading our way through a large, messy blowdown on loose terrain but stopped at a larger blowdown where we could not find the trail.

Oddly enough there were still “NPS Boundary” trail signs on trees though the signs were placed horizontally rather than vertically as the others had been! Was this sign placement code known only to trail volunteers or did it designate the “end” of the trail? After looking around and failing to find the trail and with time growing short we turned around and retraced our route back to car, taking down the few flags we’d put up on our way.

Though we’d hoped to stand atop Mount Wow again for those jaw-dropping views of Mount Rainier we’d experienced years ago, we were satisfied with our hike and look forward to exploring other sections of The Boundary Trail.