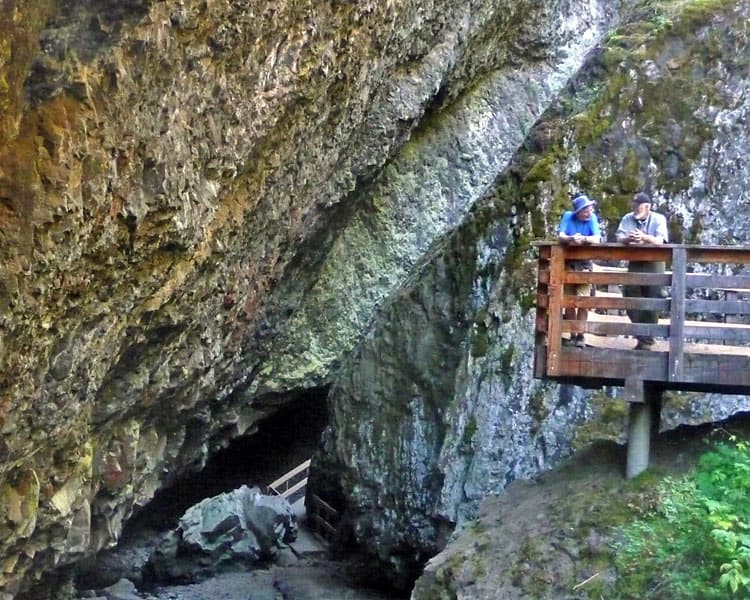 A short, family-friendly walk to Boulder Cave yields a fantastic lesson in geology as well as the delicate balance of nature. Wildflowers line the short trail in spring and summer and side-trails lead to platforms offering views of Devil’s Creek. Bring a coat and flashlights to comfortably explore Boulder Cave. To protect the cave’s wintering bat population, this trail closes during the fall and winter months at the end of September.

The trail to Boulder Cave was built in 1935 by the Civilian Conservation Corps (CCC). Even before the trail was built the cave attracted plenty of visitors causing resident bat populations to decline as early as the 1920s (bats are extremely sensitive to human-caused disturbances). Today the cave serves as a Hibernaculum to mostly Pacific Western big-eared bats (a Hibernaculum is a shelter occupied by dormant animals over the winter).

This isn’t a cave like what you might envision – Carlsbad Caverns it’s not though you’ll still need a flashlight. Boulder Cave is better described as a tunnel carved out by Devil’s Creek over time. It was created when the flowing creek came to a layer of softer rock beneath basalt and began to undercut the rock. As the creek nibbled away at the softer rock, part of the canyon wall began to tip over, enclosing the creek in darkness thereby creating a setting conducive for the bats to hibernate. Today only a few bats return during the winter to hibernate; they once numbered in the thousands. In order to help protect them, the Forest Service closes the trail from October-May. Despite being closed much of the year Boulder Cave still attracts over 35,000 visitors annually – including us – twice.

This was our second visit to Boulder Cave this year – this time we brought flashlights with fresh batteries for the short walk through the cave. On our first visit the batteries in our flashlights were weak and while it’s fascinating to walk through a cave, it’s important to have a reliable light source. If you think its dark when you go to bed, you don’t know the meaning of darkness until you’ve entered a cave and turn off the flashlight – now that’s darkness! When you see how dark the cave looks as you approach the entrance you might wish for a torch rather than a feeble flashlight.

When we visited in June the wildflowers were in bloom which made the short hike to the cave akin to a stroll through a flower garden. We didn’t see any bats (and you wouldn’t) but we did see the first tiger lilies of the year. When we returned in late August the flowers were spent; only a few gold-ochre leaves of balsamroot provided a bit of color to the dry trail.

In spring the trail was crowded; in late August we met only one small group of visitors. If you have a choice as for when to visit, we recommend this as a spring hike so you can also enjoy the wildflowers that border the trail. If you prefer more solitude, visit in September but keep in mind the Boulder Cave Natural Area closes for the season at the end of September.

The hike is more interesting if you know a little bit about bats and better yet have some knowledge of geological processes. Many species of bats are dying for various reasons but one cause is a fungal disease, White Nose Syndrome. Interpretive signs caution visitors (who have hiked any other cave recently) to hose down their shoes before and after entering Boulder Cave so as not to carry spores from one cave to another.

While the trail to the cave is short, the scenery is dramatic. Not far from the start of the hike a side-trail drops down to a platform for a closer look at the canyon and Devils Creek, a mere silver trickle in late August. Keep in mind this pretty, little creek was responsible for carving the caves and its work is not done. The creek is in the process of carving out a new cave (don’t ask – we don’t know where it is either but we’re sure the Forest Service doesn’t want casual visitors climbing around on the cliffs).

After viewing the canyon you can walk back to the main trail and continue a short distance to a junction with directional arrows to the entrance of the cave. Please stay on the designated trail; we know how tempting it is to venture closer to the edge of rocky overlooks that are not fenced, but it is dangerous to do so, especially for children.

The setting just before you enter the cave is dramatic. Here rocky cliffs bulging out above Devils Creek are intimidating and striking, especially in spring when wildflowers and ferns cling to the rocks. You’ll also find a marker near the entrance listing the names of volunteers who reconstructed parts of the trail in 1980 and an interpretive sign with a brief explanation of how Boulder Cave was formed.

We also recommend sturdy shoes and you might also want to add an extra layer of clothing; temperatures in caves are always colder than outside. With flashlights you’ll see well enough to follow the path; where it is vague, the trail is bordered with rocks. Make sure there are at least two functioning flashlights in each party – even if you are by yourself. Do not point your flashlight to the ceiling or the walls of the cave as the light would disturb any bats that are there.

Ever wonder why you feel compelled to whisper inside a cave? We do too but keeping your voice low is also recommended. Unfortunately, the Boulder Cave Natural Area has been the target of vandals in the past – vandals spray-painting interpretive signs and graffiti inside the cave.

In just a few minutes you’ll see daylight ahead at the exit but the spectacle does not end there. After you exit the cave, a boardwalk winds a little further through the canyon with close-up views of the rocky cliffs, splashed with gold and lime-green lichen, that overhang the creek. Here you may be able to get a more visual interpretation of how the creek eroded the rock over thousands of years ago.

After threading its way through the canyon, the trail climbs to another platform where you can look back toward the exit of the cave. The boardwalk then climbs back to the main trail and you can hike back to the trailhead. There’s no need to hurry – even though the wildflower displays were spent, the grasses were golden, views of the cliffs compelling and the sun was warm.

To get there: From Enumclaw head east on State Route 410 to Chinook Pass, continue east to The Boulder Cave Natural Area located just past Milepost Marker No. 95 on SR 410. Here turn (right) onto Forest Service Road 1706 which is well-signed. You’ll cross a bridge and come to a road junction. Turn right; follow signs to Boulder Cave (about 1.4 miles from the bridge). A Northwest Forest Pass is required ($5.00 day-use fee).

Have a question about Boulder Cave? Contact the Okanogan-Wenatchee National Forest at (509) 664-9200 for additional information.