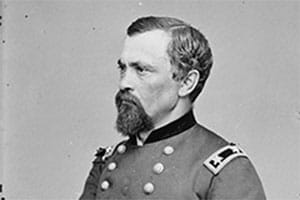 Famous for: First person to attempt to summit Mount Rainier. Fails, but reaches the 14,000-foot rim of summit crater.

Also notable for: Prominent military service including appointment to Brevet Brigadier General in American Civil War; selected as a member of the military commission trying the assassination conspirators of President Lincoln.

August V. Kautz was born in Baden Germany in 1828. In 1832 at four years old, his family emigrated to America settling in southern Ohio. During the outbreak of the Mexican-American War in 1846, Kautz enlisted in the 1st Ohio Infantry beginning his long and distinguished military career. In 1852 he came to the Pacific Northwest stationed at Fort Steilacoom on Puget Sound. He designed many of the fort’s structures and fought in a couple of Indian Wars sustaining injuries twice. And despite fighting in the Puget Sound War in which Nisqually Chief Leschi was apprehended and later hanged-Kautz believed the execution was illegal and defended Leschi, but to no avail.

Kautz married Nisqually Chief Quiemuth’s daughter Kitty Etta and they had two sons. Yet his family was not allowed to live in the fort, residing instead in a nearby Indian camp. While stationed at Steilacoom, Kautz would make his historic attempt to summit Mount Rainier. Although William Fraser Tolmie had explored what would become Mount Rainier National Park 24 years earlier, there were no records of anyone ever summiting the mountain.

On July 8, 1857 Kautz along with the Army Post Doctor Craig of Fort Bellingham and four soldiers left Fort Steilacoom for the mountain. En route they picked up their Indian guide, Wahpowety at the Nisqually Indian Reservation. Wahpowety was reputed to be familiar with the upper reaches of the Nisqually River. Beyond Mishawl (Mashel) Prairie, about 40 miles from the fort, the territory would be all new to Kautz. Two of the soldiers remained behind here to tend to the horses while Kautz and the other four continued on foot with six days worth of provisions consisting of dried meat and hard bread.

It took them five arduous days walking through deep wilderness to reach the snout of the Nisqually Glacier. The next day they began climbing up the long glacier and were met with terrible weather forcing them to set up camp at around 7,000 feet. The following day, July 16th, they set out for the summit at 8 a.m. after it had finally stopped snowing. At about 10,000 feet, Wahpowety and one of the soldiers both exhausted, turned around. At 12,000 feet the other soldier retreated, leaving Kautz and Craig on their own. At about 6 p.m. Kautz reached in his words “what may be called the top, for although there were points higher yet, the mountain spread out comparatively flat, and it was much easier to get along.” He had reached the rim of the summit crater; not the mountain’s high point, 14,411-foot Columbia Crest.

With limited provisions, night rapidly approaching, fierce winds, the temperature dropping and fatigue setting in, Kautz and Craig concluded that they couldn’t camp near the summit. They returned to their previous night’s camp where they met the others including Wahpowety suffering from snow blindness. On the next day upon assessing their stock of provisions, the condition of their party members and the unfavorable weather, they decided not to try again for the summit.

Exhausted and with limited provisions, Kautz and company made the long trip back to Fort Steilacoom. “We were much disappointed not to have had more time to explore the summit of the mountain,” Kautz recorded. “We had, however, demonstrated the feasibility of making the ascent.” It would be 13 years later in August of 1870, when Hazard Stevens and Philemon Beecher Van Trump would become the first folks to successfully reach Mount Rainier’s lofty 14,411-foot summit.

Kautz never returned to the mountain. He left Fort Steilacoom the following year, setting out for Europe before returning to America to fight in the U.S. Civil War. In the war Kautz commanded cavalry units in several battles. Toward the end of the war as a brevet brigadier general, he led a division of black troops into Richmond, Virginia. After the war, Kautz was selected as a member of the military commission trying President Lincoln’s murder conspirators. In April 1891 he assumed command of the Department of the Columbia bringing him back to the Pacific Northwest. He passed away in Seattle in 1895, just two years after retiring.

Kautz Creek, Cleaver, and Glacier on Mount Rainier’s south side are named in his honor. Wapowety Cleaver adjacent to the Kautz Glacier honors the name of Kautz’s Indian guide.