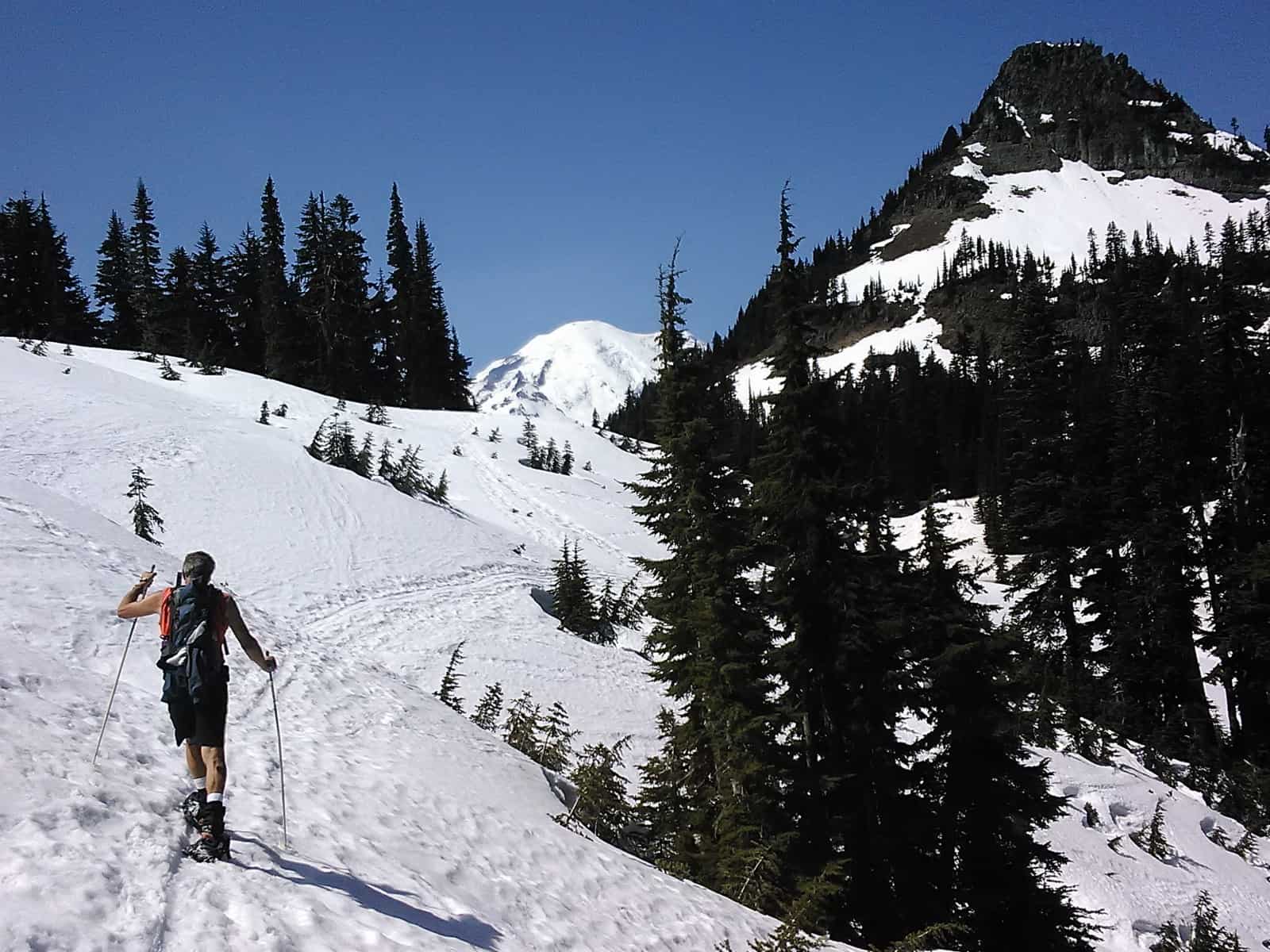 Assume nothing. Advice to live by under most circumstances, but particularly handy when it comes to hiking. This being one of the driest years on record in Washington state, I wrongly concluded that snow at the top of Chinook Pass would be as unseasonably thin as it had been at Paradise a month earlier. Fortunately, I had stowed snowshoes, yak tracks and poles in my pack that morning, on the recommendation of my more seasoned hiking companion. They would come in handy.

The temperature sat at 39 degrees when we arrived in the parking lot just over the pass summit, near the Sheep Lake trailhead. We had intended to begin our hike around Naches Peak on the north side of the trail, working our way southward for better views of Mt. Rainier and Mt. Adams. Upon inspection, we discovered the north side snowpack to be of the concrete variety and chose to begin on the south side, across the road from Lake Tipsoo.

We began the hike walking comfortably on top of the snow in our boots. The surface was firm enough to hold us and soft enough to leave an impression. This stood us in good stead until we reached full southern exposure. There, the earthen, summertime trail was exposed in several places, and we began to punch through, up to our knees, where it wasn’t. Needless to say, this made for a tiring slog in a hurry. When we reached the overlook to Dewey Lake, we stopped for a drink of water and strapped on our snowshoes. Once we were more suitably shod, we traversed across a bowl beneath a handful of backcountry skiers, and down to a tarn on the northeast side, that is a popular summertime stop for hikers and dogs. As soon as we hit the tree line again, the snow became hard packed and steep, and we were grateful for the bite our snowshoes provided during an iffy, three-quarter mile of “side-hilling.”

From June – October, the 4.5-mile loop hike takes about 2 hours on easy terrain, suitable for visitors of all ages. We made it around in under 2.5 hours, but don’t recommend it as a roadside, jean and tennis shoe hike until June. July and August are the best times for viewing wildflowers on the path, and a north to south loop is recommended for the best mountain views.

We stopped for lunch just before the Pacific Crest Trail footbridge that crosses highway 410. Skiers and snowboarders were making the most of the snow and temperatures, and we were passed by several of them as we enjoyed sandwiches and oranges on our Thinsulite pads. With a cloudless sky, temperatures in the 50’s and views galore, it was a fine end to a hike, that at times, was more strenuous than I had intended.

Back at the parking lot, assorted backcountry enthusiasts convened for a well-orchestrated tailgate party, soaking up music and facefulls of sunshine.

During the summer months, hikers can get by with athletic shoes, water, sunscreen, and a snack. For the next few weeks, though, I would recommend snowshoeing gear (boots, snowshoes, gators, and poles) in addition to layered clothing, and the aforementioned water, sunscreen and snacks.